You are here: Home / Features / Tommy Haas Continues His Return to Form with Win over Nicolas Almagro 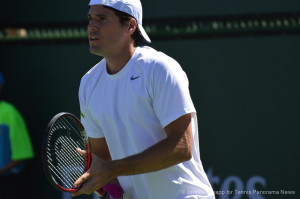 (March 13, 2013) INDIAN WELLS, CALIFORNIA – Tommy Haas, the ATP’s 2012 Comeback Player of the Year and nineteenth seed continued his strong return to form and secured his place in the fourth round of the BNP Paribas Open with a hard fought win over eleventh seed Nicolas Almagro.

The 34-year-old, making his 13th appearance in Indian Wells, took the first set 6-3 with solid serving and equally powerful returns. Almagro seemed a little out of sorts as the match got underway and it wasn’t long before he was berating himself and yelling in the direction of his camp.  Haas started off the secondset well but midway he lost his first serve, giving Almagro the opportunity to turn his luck around and even the match in a tie break 7-2. This time it was Haas’ turn to express his displeasure with his level of play.

The third and final set was perhaps the most dramatic of all as Almagro had the win on his racquet only to tighten up and lose control of his first serve, allowing Haas to break back and eventually forcing another tiebreak.  Despite the fact that the two players were pretty evenly matched, Haas was able to capitalize at the right moments and secure the match 7-6 for a 6-2, 6-7(2), 7-6(2)  third round victory.  He’ll play seventh seed Juan Martin del Potro in the fourth round. The two have played 3 times, most recently in Cincinnati last year and del Potro has won each of their matches.

Jennifer Knapp is covering the BNP Paribas Open for Tennis Panorama News. Follow the updates on twitter at @TennisNewsTPN.