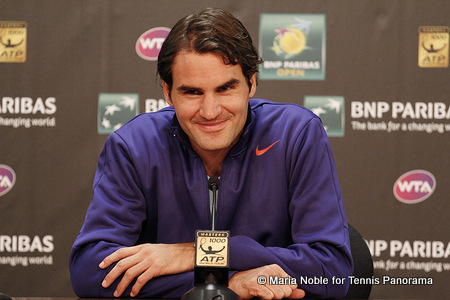 Federer took the first set comfortably and served for the match at 5-4 in the second when Wawrinka broke Federer at love.

Wawrinka said he felt better in the second set.  “After he broke me I was starting to play much more aggressive, much more better.  My game was better.

“I had few chance(s) before on the same side, and I was just trying to be focused, to make him play a lot, and try to fight like always I do in every match and against every player.

I did great passing, and, you know, I know that when it’s Love‑15, when I can get into the point, I have some chance to do something.

The set went to a tiebreak which ended when Federer double faulted.

At 1-1 in the third set Federer wanted to challenge one of his own serves, but was denied by the chair umpire because he had hit a second shot. He appealed to an ATP tournament supervisor but was denied.

Federer was broken, but broke right back. It remained on serve until Wawrinka was broken at 5-6 to give Federer the match.

“Today it was extremely close again,’ Federer said.  “Okay, I should maybe close it out in the second set, but he did well to stay in it.

“At the end, I don’t know what gets me through.  Maybe it’s the experience or maybe a bit more calm in those moments.  I’m not sure.  Today I think I was a little lucky to come through it in the end.”

Federer who is the defending Indian Wells champion will play the winner of the Ernest Gulbis-Rafael Nadal match in the quarterfinals.

“I have played Gulbis on a few occasions, Federer said.  “He’s always been tough for me to play against.  It’s not always on your racquet clearly when a guy serves this big, but that’s always the case with those guys.

So it’s a matter of staying calm and waiting for your opportunity and making him work as hard on his serve as much as you can try and have an impact on that.

“So he’s obviously on a good winning streak.  That makes him tough to play, clearly.  Yeah, I’m happy to see Ernests playing good again, because he went through a bit of a rough patch.  He’s been injured from time to time, as well.  It’s nice seeing him turn the corner again, because it’s not the first time he’s doing something good.  I hope he can keep it up for the year.

Obviously playing Rafa, it’s a classic.  We have played, you know, so many times.  We know each other really well on and off the court.  We know what to expect, both of us.  I mean, we are both a bit suspect going into our match, I guess, you know, so it’s an interesting matchup, especially ‑‑ I mean, it’s not early in the tournament.  It’s still my fourth match here.

It’s not like a first round, but it still is early in the tournament.  In the past this match used to be a final, now it’s a quarterfinal, so obviously it’s a bit of bad luck of the draw for both of us.

“At the same time, it’s very exciting always playing each other.  Doesn’t matter what stage of the tournament.”