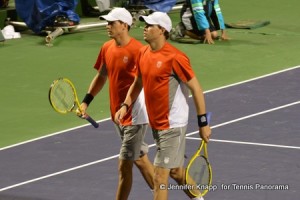 (March 15, 2013) The world’s No. 1 ranked and top seeded team of Bob and Mike Bryan (USA) are one step closer to their elusive first BNP Paribas Open trophy after their thrilling semifinal win over Santiago Gonzalez (MEX)/Scott Lipski (USA) 6-4, 4-6, 11-9 Thursday night at the Indian Wells Tennis Garden.

Playing in front of a full capacity and very vocal crowd, the shot making on both sides of the court was absolutely amazing.   The match couldn’t have been any closer with both teams compiling identical first serve percentages of 67% and points on first service won of 75% along with only 2 breaks of serve per team.  The entire match was a display of agility, speed and simply incredible shot making and the enthusiastic crowd loved every moment of it – including the Bryan’s trademark flying chest bump right after match point.

The Bryans, who previously made the finals in 2003 (l. Wayne Ferreira/Yevgeny Kafelnikov) and 2006 (l. Mark Knowles/Daniel Nestor), are the winningest team in all of professional tennis with 85 titles (129 finals to date) and are now 19-2 for the season.  They will meet the newly formed team of Treat Huey (PHI) and Jerzy Janowicz (POL) in the final.  Huey and Janowicz who have had an impressive run in their first tournament together, saved two match points to defeat the Brazilian team of Alexander Peya and Bruno Soares 7-5, 1-6, 12-10 in the other men’s’ semifinal.