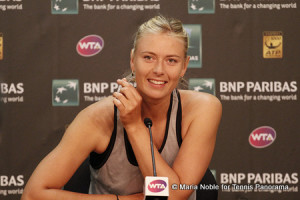 (March 17, 2013) Maria Sharapova defeated Caroline Wozniacki 6-2, 6-2 to win the BNP Paribas Open, her first title of the year. For Sharapova it her second Indian Wells title, the last one coming in 2006. It’s Sharapova’s 28th career title and first since winning the French Open last year.

Sharapova dictated the match from beginning to end in the 81 minute match. Sharapova compiled 33 winners to a mere two hit by her opponent.

“Of course she was putting pressure on me from the start, ” said Wozniacki.  “She was serving very well.  You know, I felt like everything that she wanted to do today was going in.  I mean, she was making very few errors, and if she did, then it was really at the times where it didn’t really matter.

“You know, I have to say she just played too well today.  You know, I tried.  I tried to do my best out there, but, yeah, it just wasn’t good enough today.”

“The scoreline, you know, looks a lot easier than I think the match actually was, ” Sharapova said.  “I think it was a tough match, a tough battle, and there were a lot of games that went to deuce and a lot of long games.

“You know, they could have easily swung the other way, especially some opportunities she had in that second set.  I always felt like I was always a foot ahead, especially with the breaks.  I was able to serve well today, and that helped me.”

During her run in the tournament Sharapova dropped a total of only 28 games.

Sharapova is now 14-2 on the year and will move up to No. 2 in the world when the rankings come out on Monday, dropping Victoria Azarenka to No. 3. Serena Williams remains at No.1.