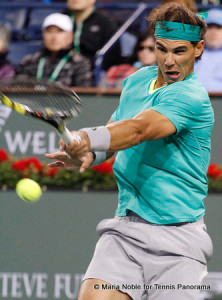 Nadal opened the match quickly taking a 3-0 lead in the first set. Del Potro found his game and rallied to take the set 6-4. Del Potro broke Nadal’s serve in the opening game of the second set and looked to take the title. The momentum switched to Nadal as the Spaniard came back from 0-2 to win the set 6-3.

“Then I think Del Potro start to play more aggressive and I lost a little bit my calm,” Nadal said.  “I didn’t make the right thing because I tried to change my direction against his forehand with my forehand in not the right ‑‑ in not a favorable position.  So that produces more mistakes than usual.

“Four mistakes with my forehand, and the last ‑‑ when I had the break back in the second everything changed.  I found the way to win points another time, to be comfortable when the ball is in the middle of the point, know how to play.  And after that break, in my opinion, I played the right tactic another time.

“I waited for the right moment to change against his forehand.”

The third set saw Nadal put even more pressure on the Argentine, breaking him the third game for a 2-1. Del Potro saved three match points while serving  at 3-5, to hold for 4-5 but Nadal sealed the victory in the next game holding easily for a 4-6, 6-3, 6-4 win.

“I think Rafa deserves to win,” said Del Potro. “He plays unbelievable for like an hour there.  The last hour of the match he didn’t make effort.  He played so solid and put me so far to the baseline and make winners from there.

“But I think I made a good tournament anyway, and Rafa played really well today the second and third set.  He broke me early in the third.  Play against him when the score is down is tougher, you know.  But I was fighting all the time but he won in the end.”

Del Potro was asked if he was tired after his three-set win over Novak Djokovic on Saturday.

“I played three sets against Murray then three sets Djokovic,” the Argentine said.  “But the finals are finals.  You know, they are special, and you get the energy from everywhere to play the finals.  I think of course if he had a day off between matches would be fantastic, but Rafa plays yesterday, also.  The conditions are the same for both players.

“I think my body was okay.  Just he played better in the end and he deserved to win.”

Nadal spoke about how emotional this victory was in light of he recent comback to the tour after a seven month hiatus due to a left knee injury:

“A lot of things happened last seven months, to be back here and to have this very heavy trophy with me is amazing, no?  I am winning three straight top 10s, beating the top 5 of the world and No. 4 and not be in the top 4 and you play quarterfinals, no?

“So beating three top 10, three very important players, and win title like this is just something unbelievable for me.  Very, very happy and very emotional.

“When, you know, when you have one comeback like I’m having is, you know, you remember all the low things, lower moments that you had during this seven months, doubts and all these things.

“Hopefully I passed, and just can remember all the people that really helped me a lot during all this time.”

Nadal is now leading the ATP with tournament titles at three and has 17-1 record this year. He is currently on a 14-match win streak. Nadal has withdrawn from the Sony Open in Miami and will be back on tour for the Monte Carlo Masters event in late April.

“The doctors recommend me to be back home for a few weeks and rest a little bit and keep practicing the right way.  You know, I need more power on the left leg quadriceps, so I need to keep working hard.  The competition is hard for the body, so after four fantastic weeks I can’t go to Miami.  I need to prepare and rest for the next one.”