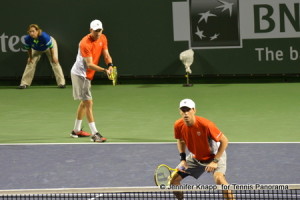 (March 17, 2013) – Top seeds Bob Bryan and Mike Bryan of the U.S. won their first BNP Paribas Open title on Saturday, defeating the first time pairing of Treat Huey (PHI) and Jerzy Janowicz (POL) 6-3, 3-6, 10-6 in 69 minutes in yet another thriller under the lights at the Indian Wells Tennis Garden.

Competing in the desert for the 15th time, the 34-year old twins, needed a super tiebreak to close out the match as Huey and Janowicz proved to be formidable opponents. Each team was only broken one time but in the end, the cohesiveness, experience and advanced skill level of the journeymen Americans proved to be the deciding factor.

After celebrating their 86th title together with a trademark chest bump, the brothers embraced.  Despite all of their success over the years, it was clear to see how much this championship meant to them.

The Bryans, who previously lost the 2003 and 2006 finals, praised Huey and Janowicz, who were playing in their first tournament together as a team,   “We’ve played 3,000 tournaments,” Bob Bryan joked, “and we barely clipped you guys.”

With this latest win, the brothers secured their 22nd Masters Series 1000s and have increased their championship match winning percentage to 66% (86 of 130 finals).

How sweet it is.