You are here: Home / Features / Jankovic and Ferrer Assist with Sony Open Draws 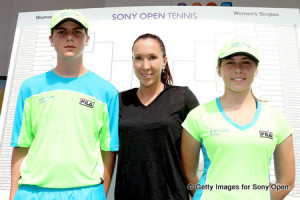 (March 18, 2013) MIAMI – Former World No. 1 and 2008 Sony Open Finalist Jelena Jankovic was on hand as the 2013 Sony Open women’s field was announced. Jankovic finds herself on the bottom half of the draw joining defending champion Victoria Azarenka and 2012 Sony Open finalist Maria Sharapova. The top half of the draw includes World No. 1 Serena Williams, who will be attempting a record-setting sixth Sony Open title; defending champion Agnieszka Radwanska, rising American-star Sloane Stephens and three-time Sony Open winner Venus Williams. 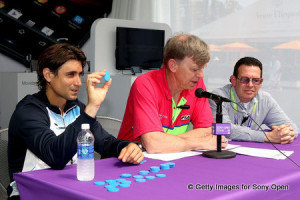 David Ferrer assisted with the men’s draw. Ferrer, who is currently ranked No. 5 in the world, is seeded in the top half of the draw with current World No. 1 and defending Sony Open champion Novak Djokovic; as well as fan-favorite Juan Del Potro. On the other side of the draw Olympic Gold Medalist Andy Murray, Jo Wilfried Tsonga; and Americans Sam Querry and John Isner will battle their way to the finals.