You are here: Home / Contributors / Behind the Scenes: An Interview with Steph Trudel 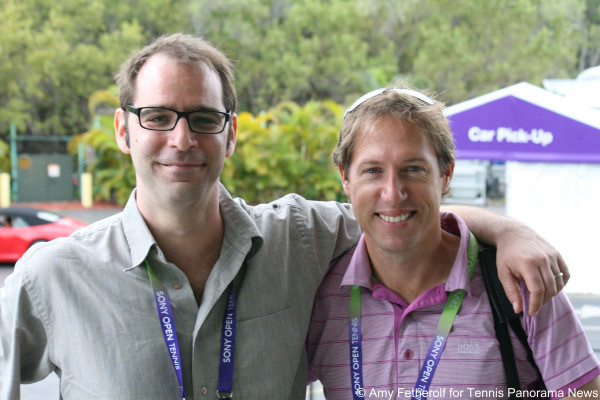 (March 22, 2013) MIAMI — For many tennis fans, what goes into tennis broadcasts remains a mystery. To shed some light on the production of the omnipotent tennis world feed, I sat down with Steph Trudel, who does graphics and statistics for television broadcasts of ATP Masters 1000 events.

Amy Fetherolf: How did you get started doing graphics and statistics for the ATP Masters 1000s?

Steph Trudel: I studied in Toronto in radio and television arts. It was a three-year program. At first I was a cameraman. Then I started working for Tennis Canada, in the summertime, for the men’s and the women’s tournaments as an in-house camera guy. So I would go around and shoot the players signing autographs.

Every year, there was an American company called IBS that would come around to provide tournament services like the radar, the scoreboards, the statistics. Then one year, in 2000, they were forming a television department. They came up to me and they said, “Look, we’re looking for someone with broadcasting experience. Would you like to travel the world doing television graphics for tennis events?” So that’s how I got the job. I flew down to Florida, lived in Jacksonville for two years, and that’s how I got started. I switched from cameraman to being a graphics operator.

AF: What does your job entail when you’re covering a tournament?

ST: We obviously get here a few days before to do the setup. We have to run all the cables, put the computers in place, do some testing to make sure all the equipment works. That normally takes two days. We get here three days before the event. And then when the tournament starts, we do the world feed coverage.

When you look at the Masters 1000s and the 500s, it has the same look. It’s the same graphics. For example, the Masters 1000 has that golden look to it. Whether you’re in Miami, or Shanghai, or Monte Carlo, the viewer can identify, okay this is a Masters 1000 event. Prior to that, when you didn’t have one world feed, you’d have broadcasters using their own graphics. So from the point of view of a viewer, there was no branding. You weren’t aware that it was a Masters 1000 in Monte Carlo this week and Rome the next week. So that’s why that part was created back then, to give a branding. And when the match starts, we input the statistics for winners, unforced errors.

AF: You track those yourself?

ST: Yeah. So every point that gets played gets analyzed. It’s either a winner or an error. And then if it’s an error, you have to determine if it’s an unforced or forced error. And then the positioning of players, if he’s at net or on the baseline, and if it’s a forehand, backhand, and all that.

AF: The world feed has those great graphics, sometimes showing serve placement or mapping a player’s toss. Is that also something you do?

ST: That is done by Hawk-Eye. Hawk-Eye can do many, many things. Not all of it you see on air, because a lot of it is very interesting, but a little more difficult to explain. We have to keep in mind that because we’re doing a world feed, these images are going to Argentina, to Russia, to Guadalupe. Hawk-Eye can give you a lot more statistics than what you see.

AF: I’ve seen some cool things, like statistics on the average distance each player is running during a point.

ST: Even when there’s a serve, they can track how fast the ball travels, so after that serve, he has .873 seconds to react to the serve and all that.

AF: If there were one stat that you would track regularly that’s not available to fans, what would it be?

AF: I’d love to see things like what a player’s go-to serve placement is on a big point.

ST: That’s all stuff that Hawk-Eye does. And a lot of times they’ll do that when a player’s serving on break point. But between points you have 20, 25 seconds. So it’s hard sometimes to get up a lot of information. Sometimes I want to put forehand winners, then you do a replay, which takes about 12, 15 seconds, so you don’t have time to put up that information. Sometimes a replay is more interesting than a stat.

AF: Sure, that’s very true. Not everyone is quite as nerdy as I am.

ST: I know especially the American audience is a lot more wanting to have statistics. It’s more of a statistically oriented culture. Whereas the Europeans, they like their stats, but they’re not as die-hard stats fans.

AF: Maybe it’s the coverage of other sports in the States. It seems like there’s a lot of advanced stats for the popular sports like baseball, hockey.

ST: Sure, for the NBA, football, and all that, yeah.