You are here: Home / Contributors / Q & A with Victoria Duval at the Sony Open 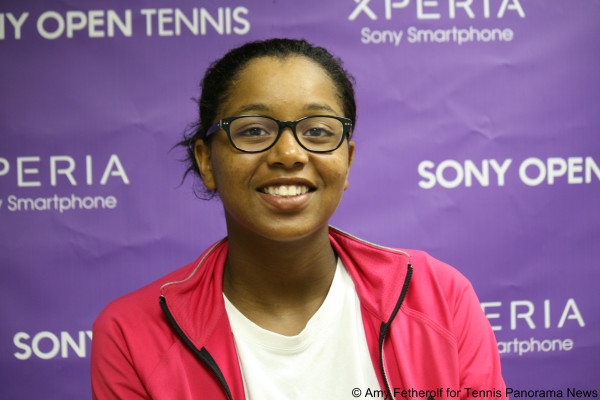 (March 22, 2013) MIAMI – I sat down with Victoria Duval, a 17-year-old Haitian-American tennis player who caught the public’s attention when she played her first WTA Tour-level match on Arthur Ashe Stadium against the retiring Kim Clijsters at the 2012 US Open. In Miami, she earned her second tour-level win, upsetting Andrea Hlavackova in the first round before falling to Jelena Jankovic in the next round.

Amy Fetherolf: You were born here in Miami, and you’ve spent a lot of time training in South Florida. What has your experience been like, playing this tournament in such a familiar environment?

Victoria Duval: It was really incredible. The crowd was amazing, too. I had a lot of support, and family was here, so it was awesome.

AF: This was just your fifth WTA tour-level match. What’s the biggest challenge in making that jump to the next level?

VD: It’s a lot of experience, learning a lot of new things, getting a lot of confidence on the way, too. It’s just mostly learning for me right now.

AF: Which players have you looked to for inspiration?

VD: I looked up to Clijsters, and Venus. I’ve been actually in contact with [Venus] a little bit through email. She’s helping me, she’s really nice. That’s been really special.

AF: Do you have any particular goals you’re setting for yourself this year?

VD: Definitely being able to get into at least the qualifying of the Slams this year with my ranking, and making the most of the wild cards I get.

AF: What’s the coolest thing you’ve gotten to do as a tennis player so far in your career?

VD: Playing Clijsters on Ashe, for sure.

AF: Did you gain a lot of new fans from that experience?

VD: I had my stardom for two days. People were coming up to me for two days like, “Didn’t you play last night?” But that was really cool.

AF: What aspect of your game do you think you need to work on to get to the next level?

VD: Definitely my serve is a big liability right now. I’m going to be hitting thousands of serves as soon as I get back.