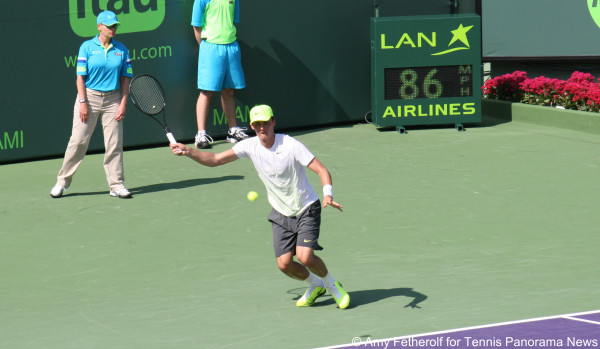 (March 23, 2013) MIAMI – I spoke with Bernard Tomic, who recently revealed that Australia’s Davis Cup captain Pat Rafter has asked him to play in their next tie against Uzbekistan, ending a dramatic standoff between Tomic and Tennis Australia.

Amy Fetherolf: Who approached whom during the talks to get you back in the Davis Cup fold? Did you talk to Pat Rafter or did he approach you?

Bernard Tomic: It was a decision we were going to meet at the Australian Open. I said to him very clear I’ll be ready to play and I’ll be available. I was told that I wasn’t going to play the second one. Was a whole lot of nonsense I think, because at the end of the day I said, “Possibly, we’ll see.” When I had a chat with him, everything was fine. The last thing I want do is not play Davis Cup. It’s a huge thing for me, and everybody on the team is ready to go now. Like I said, I’m happy to get this chance to play. Wherever it is, I’m going to try very hard, and hopefully we can win as a team.

AF: What was the rationale behind Rafter inviting you to play again? You’ve talked a lot about working harder lately. Was it a result of your improved work ethic, or was it something else?

BT: I think obviously my results the last two months have been really good. Obviously, Pat had to make a decision whether to pick me, and we had a chat. I’m happy he did pick me, and I’m ready to play. It’s amazing for me to play Davis Cup. In the future, I never want to miss a tie. Davis Cup for me is huge. I’m ready to go and to get back on a roll playing for Australia.

AF: So you and Lleyton are preparing to possibly play doubles in Davis Cup? [The pair is scheduled to play doubles together in Miami.]

BT: Yeah, we are. This is the first time. It was a dream for me growing up to meet Lleyton. Now to play with him for the first time in an actual tournament, today’s a very, very cool day for me. I’m going to use it as much as I can to play Lleyton. I learn so much every time I practice with him and when I’m with him. He’s an amazing guy, hopefully we can win some doubles.

AF: You two have been practicing together a lot lately, and Lleyton said that you spent a great deal of time together during the Olympics. Has the relationship between you two warmed up?

BT: The relationship’s fine. He’s an amazing guy. I’ve come to learn the last few years what impact he’s had for tennis, not just for me, but for a lot of people and kids around the world. To spend time with him and learn a lot from a person like that who was a former champion, if you can learn from that, you only do yourself good.