You are here: Home / Features / Serena Williams Moves into Round of 16; Hopes for the Best for Capriati 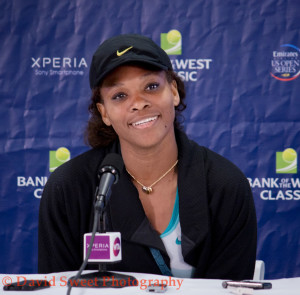 (March 23, 2013) Five-time Sony Open champion and world No. 1 Serena Williams rebounded from a 0-3 start to beat Japan’s Ayumi Morita 6-3, 6-3 in 75 minutes on Saturday night on Stadium Court. Williams has now improved her record against Morita to 2-0.

Despite the score, Williams said it was a competitive match.

“I think she’s a pretty good player,“ said Williams. “I get a good impression from her.  I played her before.  She’s tough.  She plays well.  She stays really focused and she stays really pumped up, which I think is a really good feature.”

Serena Williams spoke about her sister Venus’ withdrawal from the tournament with an ailing lower back.

“I think it was the right decision for her, “ Serena Williams said.  I haven’t seen her really on the practice court as much because she wasn’t feeling great, so I think she’s taking everything a day at a time.”

Instead of taking a Rolls Royce to the match from her hotel on Saturday, due to the heavy traffic she rode a bicycle.

“The traffic was crazy and everyone was like, I have been here for an hour and I’m staying like eight minutes away, “ Williams said.  They were in the traffic for an hour.  I’m like, Okay, I’m not going to make my match if I don’t get there.

“So I asked for a golf cart, and the hotel didn’t have a golf cart.  Then they were like, we have a motor bike.  I’m like, I don’t do motor bikes.  They said, We have a bicycle.  I said, I really don’t do bicycles, but I will today.  It was fun.”

Williams was asked about her relationship with or if she has been in contact recently with tennis Hall of Famer Jennifer Capriati, who was recently charged with stalking and battery in association with an ex-boyfriend.

“No. Last I heard she was happy I lost in Australia. ” Williams said.  “So, yeah, I don’t really know.  Shocking, but yeah.  I have always been really nice to her, though, and I see her around in Palm Beach, and her mom.

“I always tell her mom to tell her I say hi.  I honestly hope the best for her.  I hope she’s okay.  She has a good heart.”

The win puts the American into the round of 16 where she’ll face Dominika Cibulkova for a spot in the quarterfinals. Cibulkova stopped Romina Oprandi 6-3, 6-4.

Williams is looking to be the sole record holder for the most singles titles in Sony Open history. She’s currently tied with Steffi Graf with five. Williams won the tournament from 2002-2004 and 2007-2008.