You are here: Home / Features / In His Own Words – Tommy Haas After Defeating Novak Djokovic at Sony Open 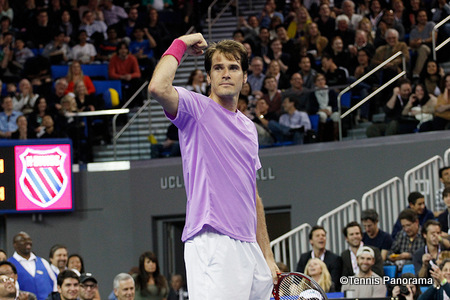 (March 26, 2013) With all of the 30-plus players active on the ATP World Tour, one has to wonder is 30 the new 20? A week away from his 35th birthday, an inspired Tommy Haas stunned a not-so-inspiring Novak Djokovic 6-2, 6-4 to move into the quarterfinals of the Sony Open on Tuesday evening.

Haas is the oldest player in t0 years to beat the No. 1 player.

For  Haas this is his second win in 14 tries against a World No. 1. The last time he topped a World No. 1 was back in 1999 over Andre Agassi in the quarterfinals of the Grand Slam Cup.

Here is his post match news conference after the win:

Q.  Talk about the feeling.  Did you believe all along that you could put him away?
TOMMY HAAS:  Well, you know, I mean, I had the mentality tonight going out there believing in it.  You’ve got to, you know.
Just from last week, you know, playing somebody like Del Potro who gives me quite a bit of trouble, you know, I sort of had a game plan.  I went out and nothing seemed to really work, you know, and I didn’t really have a game plan B.
I was just frustrated with the way I played and tried to totally, you know, focus and tried to, you know, approach this match totally different.
You know, last couple of times I played Novak was in Shanghai last year and Toronto, and Toronto we had a really good battle, which I was really happy about the way I played; he played just better in the end.
Tonight I had a good game plan, I thought.  Conditions, you know, maybe now looking back, favored me a little bit with the game that I played against him tonight.  You know, it was tough out there with the swirling wind.

You know, I’m just really happy and proud of that tonight against such a great player who has been dominating the sport the past couple of years.  I really took advantage of the opportunities I’ve gotten.  You know, I think I played extremely well.
He gave me a lot of looks, and I took advantage of it.

Q.  Is this the reason you still are playing, is for nights like this?
TOMMY HAAS:  You got it, yeah.

Q.  How do you feel with the support of the people on the stadium?
TOMMY HAAS:  It’s very nice.  I mean, any time you play such big events on the stadium, it’s always just a great pleasure to go out No. 1.
Like he just said, this is what you play for, or I play for.  These are the moments I appreciate the most, going on those big stadiums, big stages, playing against the best people in the world.
Playing against something like Novak and coming out on top at this time of my career, it’s unbelievable.  You know, it goes up as one of my, you know, most best wins of my career. You know, the fans I hope, enjoyed it.
Miami is also sort of late night loud crowd, and I think they really appreciate good tennis.

Q. It was pretty hot until the last couple of days here, and then these conditions were not really expected. Did you have to do any adjustment to your game plan based on temperature, the wind, and everything?
TOMMY HAAS: Yeah. I mean, when I woke up this morning obviously felt that it was a little bit chilly out there, and I looked at the weather report and saw it was going to be really cold and windy tonight. I wasn’t happy about it.
This is unusual for Miami time, you know, to have a drop. I think it’s supposed to be even colder tomorrow. It’s not great for me, especially with    you know, my body likes the heat, you know, to stay warm. You know, it’s something that you have no control over, either.
You know, you adjust with the racquet tension and, you know, mentally prepare yourself for it. All you can do is just do the best out there and try to adjust.

Q. When was the last time you played at such a level and maintained it pretty much the entire match?
TOMMY HAAS: I don’t know. I have had some, you know, good results last year. Probably in Halle maybe where I won the tournament, you know.
You know, you go back to obviously where you maybe have won matches against top players like that, against Roger, maintained a really high level.
It’s tough obviously. It’s one of the biggest challenges out there. You know, even looking at Novak Djokovic’s results the last two years, two and a half years, it’s just crazy, you know. You look at Roger last eight, nine years, and Nadal, how tough they are and maintaining that level.
It’s something really special. Not everybody has that gift. So I’m happy to have done it somehow a little bit tonight.

Q. He won 11 straight points; got the break back. A lot of the people in the stadium, I’m sure, were thinking, Oh, man, this guy is almost 35. The wheels are falling off. What were you thinking? How did you pull it together?
TOMMY HAAS: Yeah, I wasn’t happy, you know. I had 3 1, I think, and had a couple of break points, or one, I’m not sure. Didn’t convert it. Then I lost    I know I lost eight points in a row for him to go up 4 3. I just wasn’t happy with the way I gave those points away, really.
I didn’t think anything else of it. I just didn’t make the right shots, shot selection that needed to be happening. You know, I didn’t give him a chance to pass me or win those points. I just kind of gave it away.
I think with four unforced errors to break back, and then, yeah, I just tried to regroup in the changeover and tell myself, Try to hold here to go to 4 All and keep it tight. If you have a chance, play a little bit different than before.
That’s exactly what happened.

Q. A few years ago when you had to come off the tour because of all the injuries and the time you spent away, at that stage could have imagined almost 35 years of age you’d still be playing at this level and producing a win against world No. 1?
TOMMY HAAS: Not really. You know, there were times I wouldn’t have believed that, no way. But, you know, when I came back after my hip surgery it was a grueling, you know, I don’t know, 9 months, 12 months before I actually felt like I can sort of train again and get in better shape and sort of maybe feel like I can move and give myself a chance to at least try to go for some victories again that I would enjoy.
You know, somewhere in the middle of last year, sometime in April, May, my body sort of adjusted a lot, got better, and I could train. You know, if you can’t train and put in the hard yards in this sport anymore, you know, you’re not going to get far. You know, not at least to the point where maybe you have a chance against a top player.
From experience, you know, luckily I know that, and luckily I’m a guy that likes to work out and gets in the best shape that I can possibly can, my body allowing. You know, right now I feel pretty good, as good as I have in a long time, and, you know, just never give up.

Q. Asking about your fashion statement out there, a lot of these guys are every stitch matches, and you had a lot of different colors going on. Is that conscious or random?
TOMMY HAAS: Yeah, I’m pretty pathetic I think when it comes to color matching. Sometimes I look at myself, you know, in the mirror before I go out and I’m like, Jesus, what was I thinking there? (Laughter.)
I guess if I maybe had a clothing contract it would be different. But, you know, n this case I just put on the clothes that I really like. It’s comfortable and it sort of feels good on me. I’m not the color matching type, and my wife has to take care of our daughter most of the time so she doesn’t have time to do that, either. It falls into my hands.

Q. Still the backward hat, though.
TOMMY HAAS: Sometimes, yeah. It’s just when I sweat. You go in and out of that stage. My hair is short enough to go without a cap, but it’s just routine. Sometimes I play without it.

Q. Could you talk about your next match? You play Simon.
TOMMY HAAS: Yeah, similar conditions, maybe a little bit cooler. He’s just such a good  counterpuncher, a guy that is back wall. He moves extremely well. He knows the geometry of the game really well. He’s sort of somewhere always in the mix.
You don’t even really talk about him that much or you don’t see him in the draw that much. He’s always there, always within the top 20, top 10 over the past couple of years. You know, extremely talented, and it really depends on what kind of a night I have, I think.
I can try to mixup my game again and try to be aggressive when I have to be. And I’m going to have to change it up and sort of try to find a way, a style the way I played tonight and be aggressive, come in more, and hopefully it will be a good night, good tennis.