You are here: Home / Contributors / Sharapova Outlasts Errani in Miami 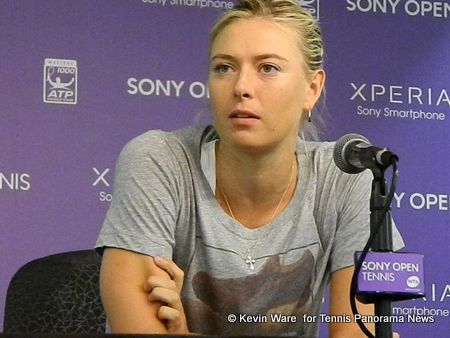 (March 27, 2013) MIAMI – Maria Sharapova overcame a late second-set charge to defeat Sara Errani 7-5, 7-5 in their quarterfinal match at the Sony Open on Wednesday. The match, an error-filled affair for both, lasted just under two and a half hours. 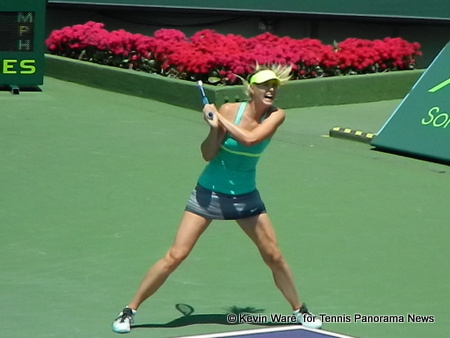 Put into context, Sharapova’s unforced error count for two sets was slightly less than the 61 unforced errors committed by Novak Djokovic in his four-set win over Andy Murray at the Australian Open.  Additionally, she served 6 aces against 14 double faults. To say that it was not her best day would be an understatement.

“Some days you can’t go out on the court and everything goes in and you feel great, and you’re playing the way you imagined to play. It just doesn’t happen.”

With a title run in Indian Wells, Sharapova had looked to continue her winning ways in Miami for the rare IW-Miami combination. She’d lost just 12 games in her previous 3 matches, and looked to be in top form. But there were early signs that this wouldn’t be her best match.

Though she won the first 3 games for a 3-0 lead, Sharapova had already hit 8 winners, committed 10 unforced errors, and served 3 double faults. Things didn’t get worse, but they certainly didn’t get better as she continued to struggle with her serve and wayward forehand. She was broken at love when serving for the set at 5-4, but got the break for 6-5.  She held to take the first set.

Sharapova readily acknowledged her inconsistent level of play. “I put a few points together pretty well, and then, you know, either my concentration or my focus wasn’t there.”

The second set offered more of the same, with a slightly higher quality of tennis. The best moments of drama came at 4-5 when Sharapova fought off three break/set points before finally converting her third game point to even the second set at 5 games apiece.  Sharapova won the final three games of the match, ending it in the same manner as she began. 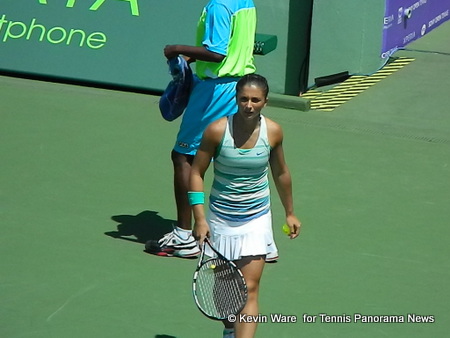 Errani did her best to keep Sharapova off-balance with strong forehands up the line followed by hard crosscourt shots, but it wasn’t enough.  “With her (Sharapova) the points are always very fast and very short.  I like another style of game, but it’s very difficult to make that because she is very strong.” 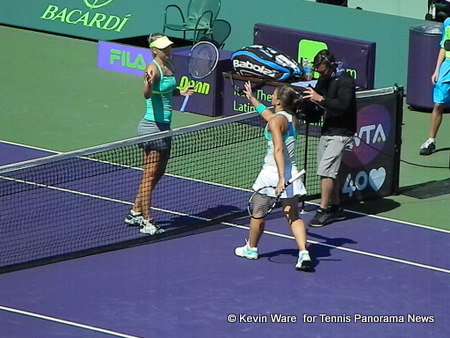 Even after this third loss to Sharapova, Errani was happy with her first quarterfinal appearance in Miami before heading into her preferred clay court season.  When asked why Sharapova seems to have so much trouble with her game, Errani jokingly responded, “I don’t know.  If I know it I can do more to win.”