You are here: Home / Contributors / Sharapova Romps Over a Weary Jankovic 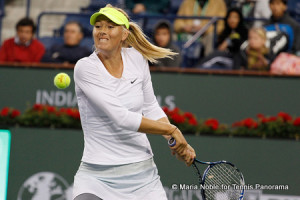 (March 28, 2013) MIAMI – Maria Sharapova rolled past Jelena Jankovic 6-2, 6-1 in their women’s semifinal at the Sony Open.  She did so with the help of an unfortunate case of scheduling; at least it was unfortunate for Jankovic, the late-night victor in a 3-set battle over Roberta Vinci. After press and other post-match activities, she had minimal rest before early morning semifinal match preparations.

Sharapova played and executed a nearly flawless match against Jankovic, so it’s not like she needed any help. Watching the match, however, it was obvious that Jankovic’s movement was hampered and her energy compromised. She acknowledged both Sharapova’s level of play and her own physical distress in her post-match press comments.

“I felt heavy on the court.  I felt really tired and exhausted.  I didn’t really have enough time to recover.” She quickly added, “But all the credit to Maria.  She played very well, and she was the better one today.”

When asked if she’d made an attempt to adjust the match schedule, Jankovic replied,” I didn’t ask for a change, but I didn’t understand why… we were playing last night really late, and then we were first on today.”

Jankovic had every right to question the wisdom of scheduling the early match on stadium court with players who had the least amount of recovery time, while giving Williams and Radwanska nearly 48 hours between their quarterfinal and semifinal matches. Yet even with an additional 5 or 6 hours, the results might have been the same given the Maria’s excellent level of play.

You have to admire the steely ruthlessness of “Maria the competitor”, whose only concern on court is “the win”. When asked whether she came out strongly in order to take advantage of Jankovic’s late finish fatigue, Sharapova said, “Unfortunately I’m selfishly not really thinking about that when I’m out on the court, because it is my job to try to win the match as well as I can”.

In her post-match remarks the day before regarding her difficulties against Errani, Sharapova mentioned Errani’s spin. “I don’t think her ball is very powerful, but I think her spin is very dangerous when she has a lot of time.” Sharapova looked much more comfortable with Jankovic’s flatter ball striking.  There’s also the benefit of familiarity when facing a known quantity.

“I haven’t played Jelena in almost two years.  But, yes, we have played many times before that, including the juniors, so we know each other’s game very well.  There’s not many secrets out there to what we do well and how we play.”

I don’t question the scheduling Serena Williams for the night match.  She is, after all, a proven marquee match player.  When you add the losses of Novak Djokovic, Juan Martin Del Potro et al to the withdrawals in this tournament of so many other top players, there’s little doubt that organizers were more inclined to schedule Williams in the evening for maximum exposure/ticket sales.

Sharapova also can’t be faulted for her ruthless competitive spirit, and excellent level of play. For Jankovic, however, the scheduling snafu was unfortunate.  She never had a fighting chance, and the spectators were short-changed on a match that possibly could have lived up to the potential of their last clash in the 2011 Western and Southern Open final (Sharapova won 4-6 7-6 (3) 6-3). Maybe next time.