You are here: Home / Contributors / Venus and EleVen Aim to Shine in Charleston 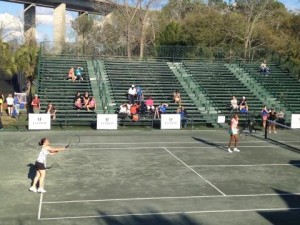 (April 1, 2013) CHARELSTON, SC – Venus Williams is ready to return to the place which was instrumental in her qualifying mission for last year’s London Olympics. A year ago, Williams hadn’t played much due to her Sjögren’s syndrome and she was ranked No. 87 when she stepped on the Har-Tru courts in Charleston.

She made the quarters in 2012, losing to Sam Stosur in a three-set battle. From then she successfully improved her ranking, made the Olympic team and walked away with her fourth gold medal, her third doubles gold with little sister Serena.

Venus recalled the battle and says revisiting each of the tournaments which helped her achieve Olympic Gold last year reminds her of her triumphs.

“I fought very hard to get back to where I was – back to the top 20,” she said. “For me last year the triumph wasn’t winning the tournament or anything like that, it was just any accomplishment was a triumph.”

Venus admits that battling back from being ranked No. 134 in the world to No. 24 “was one of the toughest and amazing and most exhilarating things I’ve ever done in my life.”

Despite withdrawing from her second round match in Miami last month due to a back injury, Venus says she is happy to be back and ready to play.

“I really wanted to be here,” Venus said. “I love this tournament and I have really great memories from here last year.”

Also appearing on the courts in Charleston is Venus’ clothing line EleVen. 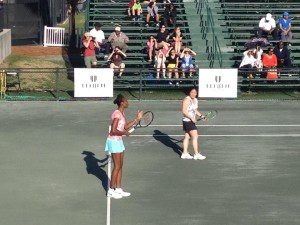 Monday night in Charleston, Venus and her EleVen brand were featured in an exhibition match on Althea Gibson Club Court. She was joined on court by her Washington Kastles teammate Arina Rodionova, Tennis Channel’s Danielle Dotzenrod and Sports Illustrated contributing writer Courtney Nguyen, all dressed in the EleVen attire. Several local Charleston women also got the chance to play doubles in a World Team Tennis style exhibition, also dressed in EleVen.

Venus said the EleVen line is going well. “We’re good. We’re small. But we’re growing and I think that’s the best way is to grow strategically and it’s great because more than anything people really like the clothes and that’s more than half the battle.”

Venus was all smiles during the relaxed exhibition and gets one more day off before playing Monica Puig of Puerto Rico on Wednesday.