You are here: Home / Features / Jankovic Survives Oudin in Charleston 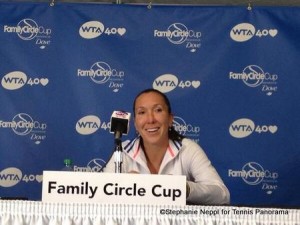 (April 2, 2013) CHARLESTON, SC – Former No. 1 Jelena Jankovic survived a tough three-set battle with American Melanie Oudin in the first round of the Family Circle Cup on Tuesday.

The Serbian had lost her two previous match ups with the American, and admitted Oudin’s style of play gives her issues.

After her 4-6, 7-5, 4-6 win, Jankovic said, “She has this game that I don’t really like and doesn’t really suit me, I always have trouble with her. I mean, it’s just her style of play is just difficult for me to play against.”

Coming off a semifinal result in Miami last week, Jankovic said she felt it was a good match despite it being her first clay match of the season. “I just came from Miami so I was playing a long tournament and took a lot out of me physically, mentally. I’m grateful that I was able to pull this out.”

The crowd was vocally behind Oudin, who has failed to find much success after her run to the 2009 US Open quarterfinals although she’s still only 21 years old. After taking the second set, Oudin fought back from 2-5 down in the third but Jankovic served it out on her second attempt to advance to the second round.

In her post-match news conference, Jankovic said she gained confidence from her run in Miami but struggled to move on the green clay. “I love playing on clay, but today I wasn’t happy with the way I was moving so I have got to improve.” 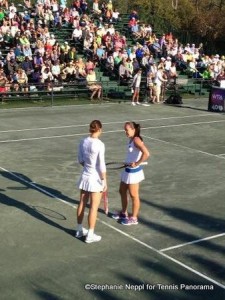 Jankovic, who won the Family Circle Cup in 2007, is in Charleston without a coach, something she says is suiting her well. “I’m here with my brother and a hitting partner, so I don’t have a coach. It’s great. My brother knows me better than anyone.”

The Serbian lost here in the first round last year to Venus Williams so each win will help her ranking, something Jankovic is focused on.

“I’m working hard every day just trying to get to another level and just overall become a better player,” she said. “My goal is to get back to the top rank where I was before.”

Next up for Jankovic is Caroline Garcia of France.