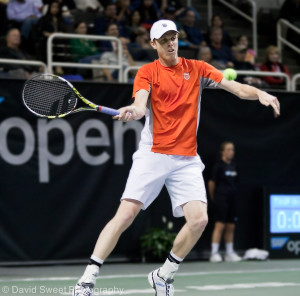 (April 5, 2013) BOISE, Idaho – Sam Querrey rebounded from a two sets to one deficit to defeat Viktor Troicki 7-6 (1), 3-6, 4-6, 6-1, 6-4, drawing the United States even with Serbia at one match apiece in the Davis Cup World Group Quarterfinals at a loud Taco Bell Arena on the Boise State University campus.

Isner got off to a fast start by breaking Djokovic early in the first set, but the Greensboro, North Carolina native failed to hold on to his advantage and went on to lose the first-set tiebreak, courtesy of a Djokovic change-of-pace serve that handcuffed the number 23-ranked player in the world.

From then on it was all Djokovic. He did his best impersonation of a backboard, neutralizing Isner’s powerful serves with solid returns and defense. The Serb wrapped up the match in two hours.

On court in a post-match interview, Djokovic was asked about how he executed his game plan against Isner.

His response: “I executed perfectly.”

Djokovic elaborated further in the news conference. “I guess one of the tactics — crucial points — was to get as many balls back on the return games and try to use my serve very efficiently and not give him any opportunities to atack my second serve. So I had a very high percentage of first serves in. That helped my confidence, and I could play with less pressure in his service games.”

Isner agreed with Djokovic that the Australian Open champion’s ability to break back in the first set was the turning point the match.

“I let him back in it,” said the American. “Granted, he played a good game, but I didn’t make many first serves that game. Doing that against this guy is not a good recipe.

“You want to make first serves, and I didn’t do in that one game in the first set. That was critical because I think he became a lot more comfortable at that point.”

Isner had seventeen aces in the match, but his first serve percentage was 54%, compared with 77% for Djokovic.

The Serb’s win set up another Davis Cup pressure cooker for Querrey, the top-ranked American and world No. 20. In the World Group First Round back in February, the Californian ousted Brazil’s Thiago Alves in a fifth and deciding rubber to send the U.S. into the quarterfinals.

Querrey and Troicki battled for 3 hours and 20 minutes in a match marked by long rallies, powerful serves and lots of unforced errors: Querrey had 82, Troicki 62.  Querrey was going for his shots, while Troicki – like Djokovic – appeared to be returning everything in sight. 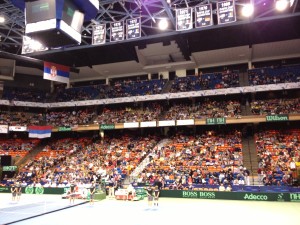 The crowd erupted in the fifth set, when Querrey broke the world’s 44th-ranked player to go up 5-4, on a Troicki shot that hit the net cord but stayed on the Serbian’s side of the court. The American went on to hold serve in the next and final game.

Querrey said finding his groove in the fourth set was key: “I stayed positive and kept with the game plan and played aggressive. That fourth set served extremely well and was fortunate to get two breaks and that gave me a lot of momentum going into the fifth set.”

Troicki said he began to tire in the fourth set:

“I get a bit tired mentally and also physically my legs were not 100 percent and got a little bit slower. I could say fourth set I just like wasn’t there.”

But Troicki added both he and Querrey played well in the fifth set, and that it just came down to who seized the opportunities.

Next up: A crucial Saturday doubles match with Americans Bob and Mike Bryan — the number one team in the world — scheduled to play Serbian doubles specialist Nenad Zimonjic and Ilija Bozoljac. But Novak Djokovic says he’s “still in the option” for doubles.

Whether Djokovic plays or not, U.S. Davis Cup captain Jim Courier says Saturday’s match is “not a must‑win.  We won’t be eliminated, nor will Serbia no matter what happens tomorrow.”

“We certainly want to win.  There is no doubt about that.  It’s an important match for both squads.  We’ll have two singles players ready to fire on Sunday.”

Junior Williams is a long-time journalist and tennis fan. At a moment’s notice he can give you a list of all the Davis Cup match-ups that would give the US home ties. He is in Boise, Idaho covering the Davis Cup quarterfinal World Group tie between the United States and Serbia for Tennis Panorama News.