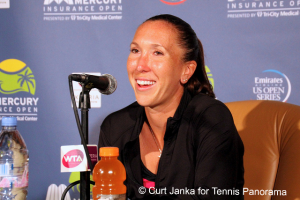 (April 6, 2013) CHARLESTON, SC – Jelena Jankovic has one of the better head-to-head records against world No. 1 Serena Williams, but she is not willing to divulge why she thinks that’s the case.

“If I’m going to give you the keys to my success, that wouldn’t be good. So I’m going to keep those cards in my sleeves still,” she said after here win over Stefanie Voegele to advance to the title match at the Family Circle Cup in Charleston.

Jankovic will face Williams, who leads their match ups 5-4, in Sunday’s final. The only time the two have played on clay was a classic final in Rome 2008, which Jankovic won in a third set tiebreaker.

On Saturday afternoon, Jankovic needed three sets to advance to the final in ousting Voegele, who had knocked out No. 2 seed Caroline Wozniacki on Friday night. Jankovic said it was a tough match physically and mentally. “I was able to turn the match around when it really mattered, when I was tired, when I was really filled up with all these emotions,” she said.

Williams and Jankovic last met in the first round of the London Olympics and the Serbian said it was important not to have any fear when taking on the world No. 1. “You have to believe you can win. It doesn’t matter who’s on the other side of the net. You’ve gotta go there thinking you are the better player and that you can win,” she said.

Williams said she’d be ready for another rematch with Jankovic. “She gets a lot of balls back and likes to go down the line. I’ll be ready for her. She’s been playing well, I think, the past month; she’s been really consistent. So I’ll have my work cut out for me.”

Jankovic, a former world No. 1, is having a resurgent season. She won her 13th career title in Bogota earlier this year, breaking a near-three year title drought. She reached the semifinals in Miami and is now in another final in Charleston. The Serbian won the title in 2007.

Meanwhile, Williams will be looking for her 49th career title and third at the Family Circle Cup.

The women’s singles final will be at 1pm EST on Sunday.