You are here: Home / Contributors / Arvidsson Stops Stephens to Give Sweden 1-0 Lead in World Group Play-Offs 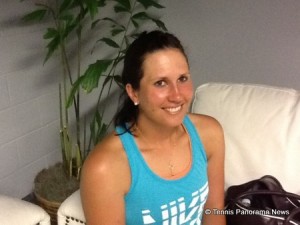 Florida has been the United States’ Federation Cup lucky charm.  In three prior visits to the Sunshine State, 1995 versus Austria, 2005 and 2007 against Belgium, the Americans never relinquished a match.  With Floridians, Serena Williams, Sloane Stephens and Venus Williams on hand, the Stars and Stripes were viewed as runway favorites.

Stephens seemed overwhelmed from the get-go.  As a result of a slew of miscues, the American surrendered her serve in the opening game.  Arvidsson went on to consolidate for 2-0.

Later on, the Swede dropped serve at love to permit Stephens to knot the first set at 2.  Soon with a hold, Stephens had a 3-2 lead.

However, a consistent opponent and 21 unforced errors turned out to be Stephens’ undoing.  Arvidsson broke for the third time for 5-4, then went on to easily serve out the opening set.

Stephens managed to reverse the tide in the second set.  Despite permitting a 3-0 advantage to melt away, Stephens cleaned up the stats sheet with a positive ratio of winners to unforced errors.  The American broke her rival at 5-4 to push the match into a final set.

The hot and humid conditions permitted both players to invoke the heat rule.  During that respite, a light drizzle came down which further postponed the deciding set.

The interlude appeared to squash Stephens’ momentum.  By committing a double fault, the American gifted Arvidsson double break point to start the set.  With Stephens dumping a forehand into the net, Arvidsson captured the break.  The Swede secured the four consecutive games as Stephens littered the court with mistakes.

In the sixth game, as Stephens’ forehand volley landed on her side of the net,  Arvidsson sealed her third break of the set to convert on her fourth match point opportunity.

Head-to-head, Arvidsson and Stephens split their two previous matches.  Unlike Brisbane earlier this year where Stephens “was dictating the points”, Arvidsson stated. “I tried to be aggressive.  That’s when I won my points”.

The rain was welcomed by Arvidsson “first set was really hard, I was kind of tired in the second.  I think the break was good for me.  It was a little cooler when we came out”.

For Arvidsson the opening match was crucial “first match is always important.  You want to win and put a lot of pressure on the other team.  [Particularly] with Serena a very big favorite in the second match”.

Stephens was disappointed with the result “she played really good tennis.  It was definitely tough conditions.  I thought I played pretty well.  It’s unfortunate that I didn’t get my first Fed Cup live rubber win at this home tie”.

Stephens admitted the pressure was not being the “lead off match.  I think it was playing my first live rubber at home. . .this is the most pressure and anxiety I’ve had since Australia. . .I didn’t want to let my team down”.

Still Stephens is trying to be positive “I’m going to go out for my team, hope Serena wins her match and we can start up with a bang tomorrow again. . . A lot to learn. . .my next tie I’ll definitely know what to expect”.

This is the fifth showdown between these two countries, the U.S. lead Sweden 3-1.  The latter triumphed at their ultimate meeting in 1988.  Sweden is vying to regain world group status for the first time since 2003.

Nathalie Narcisse is in Delray Beach covering the Fed Cup tie for Tennis Panorama News as media. Follow her twitter updates on @TennisNewsTPN.