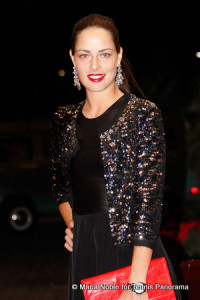 (April 21, 2013) STUTTGART – There were few surprises on the first day of the Fed Cup World Group playoff tie between Germany and Serbia. As expected, Ana Ivanovic maneuvered past Mona Barthel in a tight three-set contest that showcased the young German’s knack for producing both the spectacular and the gruesome in equal measure. Similarly predicable was a tough but straightforward victory for Germany’s own number one, as Angelique Kerber outran Bojana Jovanovski to balance the tie precariously at 1-1.

As the two number ones took to court on Sunday, first indications pointed to a yet another predictable result as Kerber raced to a 3-0 lead over the former French Open champion. Ivanovic arrived attempting to play her well-known attacking tennis, but struggled to find a sizable chink in the German’s defense Before long, the Serb faced the indignity of possibly falling to a 0-4 deficit and yet another tame loss to a top player appeared likelier with every stroke.

A myriad of loopy backhands, a handful slices and a few dropshots later, the first surprise of the weekend arose. Ivanovic suddenly moved further behind the baseline and, seemingly on a whim, decided that the world number five was deserving of none of the pace the Serb had been feeding her with. It’s no secret that – as Sara Errani can proudly attest to – Kerber detests “junk” and struggles when forced to create her own pace. The scoreline also agreed. From 3-0 and break point, Kerber suddenly found herself down 3-4 as Ivanovic flipped the match on its head, opening up a box of tricks that had steadily collected dust since that glorious spring in 2008.

From 4-3, a shift occurred, confidence appeared to well up inside of Ivanovic as the aggressive play returned. Though she continued to struggle on her return of serve, Ivanovic attempted to wash away her opponent by returning to the familiar feeling of dominating with her forehand. The times she found herself down break point, she responded by aggressively playing her way out of danger or else attacking before throwing in a well-timed slice to throw her opponent off. Kerber hung on, but the rapidly rising wave of inevitability eventually crashed down. Ivanovic broke in the twelfth game to take the set 7-5, fittingly ending with Kerber struggling to time yet another pace-changer from Ivanovic’s racket and directing a forehand into the tramlines.

The second set followed a similar pattern as the pair exchanged service holds during the early stages. Once again, Ivanovic broke at an important moment – the ever-pivotal eighth game – and appeared well on her way to capturing the match up 7-5, 5-3. After scraping back triple break point down, she finally found herself up match point. A big first serve followed, and all that stood between Ivanovic and her first claycourt top five victory was an short backhand. Two seconds later, the backhand was dumped into the middle of the net and ten minutes later the scores were tied at 5-5.

The predictable response from Ivanovic after failing so spectacularly on match point would have been a total collapse as Kerber finally burst to life with a slew of her own trademark passing shots. However, in her own words, Ivanovic remained calm and coolly held serve for 6-5. More match points passed by but this time she refused to be affected as she gleefully sank to her knees after eventually closing out a masterclass in playing reactionary tennis and adjusting her gameplan mid-match. Now that – that was a surprise.

Tumaini Carayol is in Suttgart covering the Fed Cup World Group Playoff for Tennis Panorama News. He is a contributing writer at On The Baseline, and writes about professional tennis at his site Foot Fault.