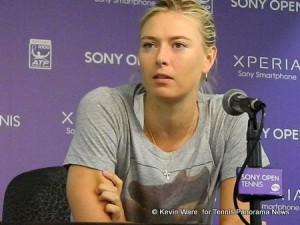 (April 25, 2013) STUTTGART – Wednesday afternoon, Maria Sharapova could be found in the Porsche Arena, practicing on court two. Pitted against a young male German junior, the French Open champion was in devastating form.

A brief set of points saw the Russian so dominant over her opponent that coach Tomas Hogstedt found himself continually bursting unto sporadic laughter at the sheer brutality of his charge against this nameless child. More relevant still was the manner in which Sharapova moved around the ball during her practice session – skipping around the ball with precise, quick and measured footwork.

Twenty four hours later, the Russian’s game had descended. In place of the silky footwork and assured movement around the court was a sluggish, labored attempt at moving into position and navigating the clay, and the confident and supreme ball striking had been substituted for a copious amount of errors – 46 in total.

“I played a really good opponent that’s had tremendous results on a claycourt,” she said later. “I think this is one of her favorite surfaces. And in general she’s not an easy player to play against. I needed to be ready and no matter how I played today, I’m just happy to have got through this match.”

In that would have seemed laughable half a decade ago, her face lit up when discussing her new preference for red clay, a surface she has amassed an impressive 42-6 record on since her return from shoulder surgery and, for various reasons, has unarguably become her best surface by a considerable distance.

“Over the years I’ve really started to enjoy it,” she smiled. “I used to dread practicing the weeks the before. The movement and the preparation – I really enjoy that now. Before it used to be a bit physical and quite difficult (…) but now I’m really quite comfortable on it.”

There may not have appeared to be much love lost between Sharapova and red clay today in the messy heat of battle, but somewhere in Stuttgart is a junior still nursing deep mental wounds from the uncompromising beating he received at the hands of the reigning French Open champion. He’ll agree.

Tumaini Carayol is in Stuttgart covering the Stuttgart tournament for Tennis Panorama News. He is a contributing writer at On The Baseline, and writes about professional tennis at his site Foot Fault.