You are here: Home / Contributors / Sharapova and Ivanovic Turn Back the Clock in Stuttgart 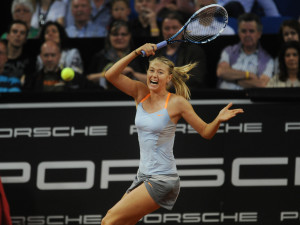 (April 26, 2013) STUTTGART – Six years ago, this battle was fought in the penultimate round of the greatest clay court event on the planet. As Ana Ivanovic dispatched forehand winner after stone cold forehand winner, the victor of the duel became abundantly clear long before the final ball was struck.

An hour later, with only three games relinquished, Ivanovic had waltzed into her first ever Grand Slam final over Maria Sharapova. The one unarguable implication this demolition exposed was the clear and seemingly immovable gulf in class between the pair on red clay and the superiority it was assumed Ivanovic would hold over Sharapova for years to come.

Over the course of those six years, this infallible truth slowly but surely unraveled. Despite arriving on the WTA as one of the most comfortable, natural and eventually best female claycourters on the planet, the years that followed brought more hardships on the surface than anywhere else. Before this week, Ivanovic’s form on clay court had sunk so low that her last quarter-final finish on the surface occurred in 2010. Since then, the faster hardcourts have proved her most successful surface, the quick courts supplying her thinner frame and more timing-reliant forehand with that crucial extra pop.

Conversely, Sharapova’s found her greatest early successes as a teenager on the hallowed lawns of England whilst famously dubbing herself a “cow on ice” when addressing her annual clay woes. Since her return from shoulder surgery, however, she has amassed a stellar 43-6 record on the surface as the red dirt has unarguably become. Thus, a gulf between the pair on red clay remains, but it has transformed far beyond logic.

Despite that, all that separated the pair on the day was a mere six points as Sharapova barely escaped a resurgent third-set comeback from the Serb, gritting out the match 7-5 4-6 6-4. Meanwhile, a disappointed but satisfied Ivanovic was more than aware of her changing fortunes on clay.

“You know, when I got back to play this year. I was training and I really, really was so happy and felt so good on clay,” she said. “And I love performing and it’s my favourite surface. You know, I grew up on it. So I really am really happy I have an opportunity to compete on it again. And I really find my best tennis there.”

Though the champion ultimately triumphed, the match serves as an important reminder that, in the game of tennis, only the present matters.

Tumaini Carayol is in Stuttgart covering the Stuttgart tournament for Tennis Panorama News. He is a contributing writer at On The Baseline, and writes about professional tennis at his site Foot Fault.