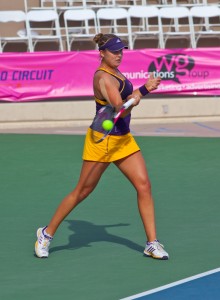 The winner of the Har-Tru USTA Pro Circuit Wild Card Challenge was determined by the player who accumulated the greatest number of WTA ranking points at two of three USTA Pro Circuit $50,000 clay-court events: the Dothan Pro Classic in Dothan, Ala., the Boyd Tinsley Clay Court Classic in Charlottesville, Va., and the Audi Melbourne Pro Tennis Classic in Indian Harbour Beach, Fla.

After her title in Charlottesville, Rogers, who trains at the USTA National Training Center – Headquarters in Boca Raton, Fla., is currently ranked a career-high No. 190. Rogers claimed one additional singles title on the USTA Pro Circuit in 2012, beating US Open junior girls’ champion Samantha Crawford in the final of the $50,000 event in Yakima, Wash. Despite missing much of the spring and summer of 2011 due to injury, Rogers managed to reach the quarterfinals at three USTA Pro Circuit events that year. As a junior player, she won the USTA Girls’ 18s National Championship to earn a wild card into the main draw of the 2010 US Open for her only appearance in a Grand Slam main draw.

*The women’s wild card is awarded from the best combined results in two of the three events below.

*The men’s wild card is awarded from the best combined results in two of the three events below.