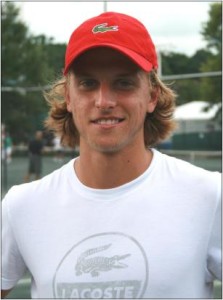 “I’ve been playing well this week, so I felt like if I came out and played my game today it would go my way,” said Kudla, who won his third career challenger title. “It feels great to win here this week. It was kind of unexpected to do this, but I trusted my training.”

In doubles, the No. 1 seeds Austin Krajicek and Tennys Sandgren stayed true to their ranking with a well-earned 1-6, 6-2, 10-8 victory over Greg Jones of Australia and Canadian Peter Polansky.

“I got a little bit impatient sometimes, trying to shorten the points with drop shots,” said the 22-year-old Stebe, who owns three challenger titles himself. “I wasn’t able to go in the long rallies with him. He played well today, making it tougher for me in the important points.”

Kudla won the first set on a backhand long from the German. In the second set, the American opened up a 3-0 lead and didn’t look back, closing out the match in 68 minutes.

Kudla is projected to reach a career-high No. 114 in Monday’s rankings and says his goal is to receive direct entry into this year’s US Open.

Kudla is the 15th American to win in Tallahassee in 21 years of the challenger’s history, including five out of the last six years. Tim Smyczek was defending champion and Donald Young won here in 2011.

For Americans Krajicek and Sandgren, it marked the first time they had played doubles together – ever.

“It’s a great start to win our first tournament playing together,” said Krajicek, 22. “We have good chemistry on the court and played the big points well. It’s always better to get a win.”

Krajicek won his fourth challenger doubles title while Sandgren, 21, collected his second. Tennys noted the change in Tallahassee from hard courts a year ago to green clay for this year.

“I liked playing on the clay this week,” said Sandgren. “The grounds crew really knew what they were doing … it’s not that hard to pull off. But they did a great job on it.”