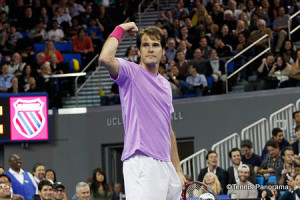 “It’s a sensational feeling to be quite honest,” Haas said of the win. “It was another one of those milestones that I hoped for, to maybe win this title one year. To have done that, this late in my career, is a big highlight for me. Every time you win a title, it’s a reflection of putting everything together the whole week. It doesn’t happen that often. You’re really proud of those moments.

“It’s the icing on the cake when you have family here that you don’t see too often. Having my fiancé, my daughter and my mother-in-law coming all the way here to support me, couldn’t have been much better.

“I knew it was going to be tough. He’s played well here before and was looking for his third crown and it was maybe my last opportunity to win the title here. So I gave myself a little bit of extra pressure. I served well and I played well when it counted. When I was serving for the match, he played aggressive, came up with some good shots, and was rewarded for it. Then I told myself to get into the tie-break and play it as well as you can. I didn’t want to play a third set against him, having served for the match, so I was really pleased with that.”

Despite not defending his title, Kohlschreiber said it was a good week.  “It’s very frustrating to lose in the final, of course, but Tommy played a very good match. It was a great week; it’s always special to play at home. I’m happy with my performance. I really look forward to the upcoming clay-court tournaments. I’m pretty confident playing on clay and hopefully I’ll have a good run.”

Haas will see his ranking rise to No. 13 when the new rankings are released on Monday.