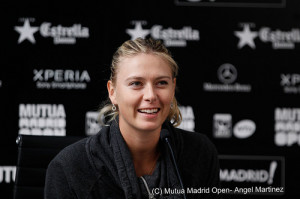 (May 9, 2013) Up first on Central Court, Maria Sharapova continued her undisputed reign on the red dirt with a hard-fought straight  sets victory over Sabine Lisicki 6-2, 7-5.

Despite the one-sided first set scoreline, the reigning French Open, Stuttgart and Rome champion found herself deep in battle from the beginning as Lisicki showered her with numerous booming forehand winners. Countless lengthy deuce-riddled games followed as the pair went blow for blow, but the Russian’s far superior mental strength proved the difference as she triumphed on the vast majority of important points and strolled through.

After dropping the first set, a sense of calm fell over Lisicki as she settled into the match, complimenting her booming forehand winners with well-executed touch around the court. Early in set two, a variety of deft forehand angles, dropshots and impressive net forays were enough to throw Sharapova off-balance, allowing Lisicki to secure a 3-1 break lead, a thorn into Sharapova her pursuit for the one big clay title currently missing from her resume.

Predictably, Sharapova immediately broke back as the intensity of the battle increased rose dramatically. The pair traded service holds until, with Sharapova serving to stay in the set at 4-5, Lisicki sensed the opportunity. She pounced, and quickly found herself up a double set point. The 26 year-old’s focus immediately catapulted into overdrive as she knocked aside the possibility of a looming third set before breaking after a lengthy game at 5-5. Before long, the victory was the Russian’s and her red clay streak had stretched to 23.

Afterwards, Sharapova was satisfied with her victory.

“She’s the kind of opponent that plays extremely well against top players. I think you can see that from her results. She always takes the top players quite far, and she beat me last year at Wimbledon.

“So, yeah, I was quite happy to turn around that victory going into the Olympics. This was our first meeting on clay, so that was a little bit different.

“But overall I think it’s about keeping my intensity as much as I can. Obviously if you can be on the court for over three hours, maybe you’re not going to play with intensity every single point, but the more that you do the better chances you have of winning.

Sharapova was quickly joined in the quarterfinals by top-seeded Serena Williams who, after a sluggish start, produced her best display of the tournament as she steamrolled through 12-seeded Maria Kirilenko in an uneventful 6-3 6-1 demolition. Williams was typically understated in her review of her performance.

“I think it was okay. I haven’t had a chance to talk about it after with my team, but I will. Like you said, I am a perfectionist. I always try to look for things that I know I can do better. When we get together I will see what I can do better.”