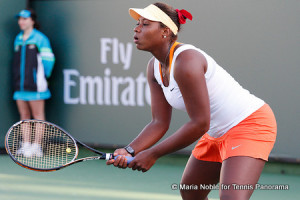 Townsend finished last year as the No. 1-ranked junior in the world, becoming the first American girl in 30 years to hold that distinction. She remains No. 10 in the ITF world junior rankings despite thus far having played only professional tournaments in 2013. In her first WTA-level main draw match, Townsend beat then-No. 57 Lucie Hradecka in the first round of the BNP Paribas Open in Indian Wells, Calif., in March.

Townsend, who in 2012 won the Australian Open junior singles title and junior doubles titles at the Australian Open, Wimbledon and US Open, headlines an American girls’ contingent accepted to play in the French Open Junior Championship that includes Victoria Duval (17, Delray Beach, Fla.), currently No. 285 in the WTA rankings. In 2012, Duval won the USTA Girls’ 18s national title to earn a wild card into the US Open main draw, where she played Kim Clijsters in the first round.