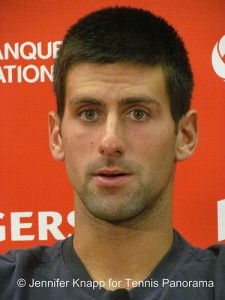 “It’s a very strange situation,” Djokovic said. “I played very well and was two points from winning. Then the entire match changed and I was a different player.”

“I know I can play well on clay and so I shouldn’t allow myself to have these drops and let’s hope it won’t happen for Roland Garros,” Djokovic said to media in regard to the upcoming French Open. “I’m fine. I just lost my rhythm.”

As for the women’s No. 1, she did not disappoint. Serena Williams extended her current win streak to 22 with a 6-2, 6-0 thrashing of Carla Suarez Navarro.

Martina Navratilova holds the record for the longest women’s win streak in the Open Era at 74 matches back in 1984.

“I guess this is the best period in my career, but I don’t really think about it,” Williams said of the winning streak on the WTA website. “For me it’s just about winning matches and winning tournaments and being consistent.”

No. 2 Maria Sharapova withdrew from the tournament prior to her quarterfinal match against Sara Errani due to an illness.

“I was already a bit off in Madrid and played though it and it came back last night and I got sick again and it’s not smart to compete again,” said Sharapova. “Obviously with the French Open coming up it is important to make smart decisions.”

Rafael Nadal was extended to three sets in his victory over countryman David Ferrer 6-4, 4-6, 6-2 to move into a semifinal match against Tomas Berdych.

Roger Federer capped off the day’s play with a 6-4, 7-6(2) win over Jerzy Janowicz to move into a semifinal match-up against Benoit Paire who dismantled Marcel Granollers 6-1, 6-0.