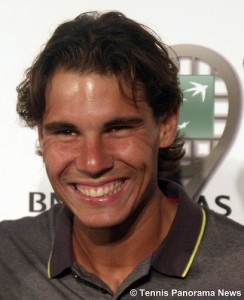 For Nadal, the win gives him his fifth tournament title of the 2013 season, the most on the ATP tour.

“If you told me four or five months ago that after eight tournaments I would have won six titles from eight finals, I would say ‘you are crazy’, Nadal said. “To win three (ATP World Tour) Master 1000 and two (ATP World Tour) 500 tournaments is more than I ever dreamed.

“All I can say is ‘thank you for the support and to my team’. Thanks to them I have the chance to be here again and compete. I don’t want to think about Roland Garros yet. Let me enjoy this victory.”

“It didn’t go how I hoped and I was missing too many easy forehands and crucial point,” Federer said. “He does an incredible job returning form the back of the court and it is hard because he covers the court so well. You need to serve accurately. When Rafa is at his best he creates opportunities in rallies and dictates. It was difficult to change.

“I am playing well and I am healthy, so I have everything to play for next week. This week was good to get an idea about what is working.”

The seven-time Roland Garros champion goes into Paris next week on a 15 match winning streak, having taken consecutive titles at Barcelona, Madrid and Rome. The French Open begins on May 26.