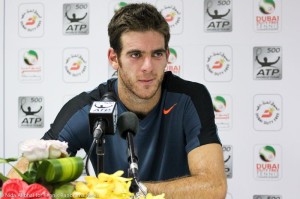 (May 22, 2013) Argentine media and Reuters have reported that world No. 7 Juan Martin Del Potro has withdrawn from next week’s French Open, still suffering from a virus.

“I am sad to miss such an important tournament, one that you always dream of winning,” Del Potro was quoted on the Ultima Hora website (www.ultimahora.com).

Joining the Argentine on the sidelines will be Americans Mardy Fish and Brian Baker. No. 2. Andy Murray withdrew from the Paris event on Tuesday and will be replaced by a lucky loser.

Fish is still dealing with heart issues, while Baker is still recovering from knee surgery. Fish and Baker will be replaced by Joao Sousa of Portugal and Guido Pella of Argentina.

Withdrawals on the women’s side include – Chan Yung-jan, Alexandra Dulgheru and Lara Arruabarrena. Shahar Peer, Tatjana Maria and Nina Bratchikova will replace them.

The French Open begins this Sunday, May 26.