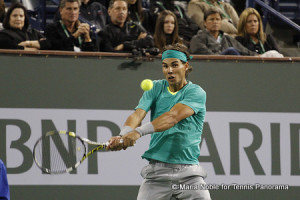 Ranked 59th in the world, Brands, a hard-serving player who hits flat with a big forehand fought off two break points in the opening set while serving at 3-4.

“I started the match playing I think okay, well, but I get a little bit nervous when I didn’t have the break with the 4‑3, 15‑40, “ Nadal said.  “And then, you know, then I played a bad game with my serve.  And he was serving great during the whole match and hitting every time the first ball fantastic.”

In the next game Nadal’s serve betrayed him, double- faulting on break point to give Brands a 5-4 lead. Brands held to win the first set 6-4.

Both men remained on even terms and reached a tiebreak in the second set. Brands took a 3-0 lead in the tiebreak but Nadal, the third seed, stormed back winning seven of the next eight points to take the tiebreak and the second set 7-6(4).

“Was a mistake for him with the 3‑2 of the tiebreak, slice backhand,“ said Nadal.

“And then with the 5‑4 I think I played two break points, I think, one winner with my forehand down the line, and then a fantastic return winner down the line with my backhand.  In the right moment I hit two fantastic shots that probably was the match.”

“I was losing a little bit concentration after the tiebreak,” Brands said.  “Yeah, it was really tough for me, because, you know, he broke me early in the set, and then I had to come back always.

“Yeah, from that point I think he was just better after the second set.”

Despite the loss, Brands told media what he gained from this experience.

“That’s, I think, really important for the future, also.”

The 6-foot-5 Brands is still winless in his career at Roland Garros at 0-5.

“He was playing unbelievable,” Nadal said. “He was trying to hit every ball as hard as he can. Sometimes you feel you are not hitting a bad shot, and every time comes back a bomb. So I am very happy to be through, seriously.”

Nadal will face Martin Klizan in the second round.