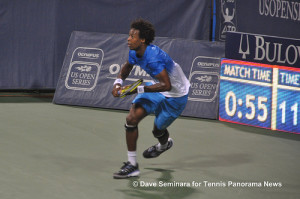 The former top ten player and 2008 French Open semifinalist who is coming back from a knee injury lost in the final of the Nice Open this past Saturday.

The world No. 81 Monfils rocketed 26 aces past Berdych and lost his serve only once in the four hour three minute contest. Berdych had 57 unforced errors to Monfils’ 44.

The match which lasted four hours, ended when Berdych hit a backhand long.

“I had one chance in the fifth set, “Berdych said.  “I didn’t make it.  He made one, so he made it.  That’s absolutely what was the difference between us today.”

The Czech has now lost in the first round of a major a total of 10 times, at least once for seven consecutive years.

Monfils will play Latvia’s Ernests Gulbis in the second round.