You are here: Home / Contributors / Jankovic Squeaks by the Rain and Hantuchova at French Open 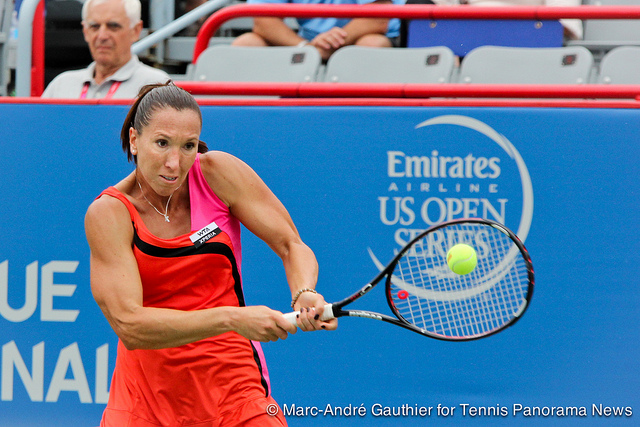 (May 28, 2013) PARIS – Jelena Jankovic advanced to the second round, in a tight straight sets win over Daniela Hantuchova, in a match disrupted by rain.

Both players just looked relieved to be able to get underway, and Jankovic was rewarded with an early break as Hantuchova was still struggling to find her range. However, once Hantuchova got into her stride, she was having a lot of luck moving Jankovic out wide and out of position, firing down some classy winners.

Jankovic missed three set points, but made up for it serving it out, moving forward and finishing the set off with a couple of neat volleys at the net. Hantuchova roared into the second set, really going for her shots and painting the corners and the lines, as the momentum definitely seemed to have deserted the Serb.

Hantuchova swept to a 5-0 lead in a marked contrast to some of her games in the first set, while Jankovic looked all at sea, being yanked around the court.

Having built up a 5-0 lead, a couple of disputed calls seemed to rattle Hantuchova, who promptly double-faulted, and Jankovic finally got herself on the board on her third break point chance.

Before either Jankovic or the crowd had a chance to see if this was the start of a comeback, the women came off rapidly for another rain break – quite a while before any other courts followed suit.

At the re-start the Serb started the more aggressively, breaking Hantuchova again, and finally getting on even terms.

The tiebreak was a tight affair, with the pair trading mini-breaks until Jankovic was able to nail the win on her third match point.

She admitted afterwards that the rain delay had come at just the right time for her.

“I wasn’t satisfied with the way I played that second set,” she said.

“I changed some things tactically and came out much stronger after the rain delay so it helped me a lot.”

It has been a difficult day, and there have been a lot of scratching heads at the number of doubles matches starting with a backlog building already from today, and with more bad weather forecast for tomorrow.

But Jelena shrugged that off.

“You never know when you’re going to go on court so you always have to be on alert and just ready to go on at any time.

“So I was ready, I was prepared mentally for that and actually the rain helped me today so I don’t want to complain (laughing).”

Going into this match, Jankovic was 5-3 in the head-to-head, and 3-2 on clay but gave credit where it was due.

“She [Hantuchova] was returning those balls so deep and she was not giving me a chance to attack or play my game so credit to her, she did very well.

“Then I managed after the rain delay to regroup and figure out my way to win.”

The players were taken off earlier than the other courts, and the rain had not actually started, but the umpires were informed a shower was coming, and it obviously affected Hantuchova’s momentum.

She said: “So many things that can affect one match like this.

“It was very unfortunate that we had to play against each other in the first round.

“But I respect Jelena very much – we’ve had so many great matches in the past, it’s always fun to play her.”