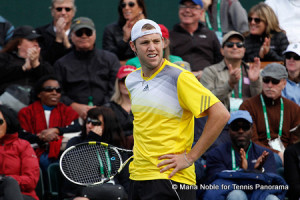 World No. 118 Jack Sock was the only U.S. player in the win column on Day three of the French Open.

During his post- match news conference Sock, who made it into the main draw as a qualifier, shared the story on why he has two sets on initials on his sneakers.

“I grew up playing junior tennis with one of the kids named Alex Rovello, played a bunch of junior tournaments with him.

“His family came out to the US Open last couple of years and watched, and gave them tickets and everything.  They were just good family friends.  He was a good friend from juniors.  He passed away in a tragic car accident a couple weeks ago.

“And then a guy I played high school tennis with, Brian Boyd, also passed away in a car accident in the last couple of weeks.  And, yeah, spent a year or two playing high school tennis with him.  I mean, team parties, team dinners, all that, I mean, we were friends.  Just sucks to see someone go that soon.  They were both 21, I think, sophomores, juniors in college.

“So, yeah, it’s definitely been ‑‑ kind of hits you out of nowhere.  So I put the initials on my shoes and definitely thinking of them out there.”

As for the match, Sock was very excited about playing on the clay in Europe.

“And to come through quallies and have some momentum and confidence definitely and come in the main draw and then playing him, playing Garcia‑Lopez, who I played in Bordeaux last week or the week before, it was nice to have a little insight on his game, and was able to play well today and get the win.”

Sock made his debut in a major just last August at the US Open where he made the third round.