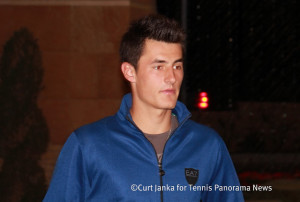 (May 28, 2013) PARIS – Australia’s Bernard Tomic was forced to retire from his first round match at the French Open on Tuesday with a torn right hamstring. He was trailing Victor Hanescu 7-5, 7-6 (8), 2-1. Tomic’s father John has been in the news due to a pending assault charge. Tomic’s father allegedly assaulted his son’s practice partner in Mardrid. Tomic has been prohibited from receiving credentials from both the ATP Tour and the International Tennis Federation.

Before the beginning of Tomic’s post-match news conference he made the following statement:

“You know, I’d like to say some things before you guys ask me about them obviously involving my father.

“Involving the incidents that happened, I don’t want to talk about it a lot ‑‑ or at all, I should say.  And it’s a very difficult thing for me, you know, to put my words into that.

“If you can respect all I have to say about this, you know, I’m happy to talk about the match.”

Tomic  later was asked to clarify his coaching situation with out his father: “It’s a little bit different, but, you know, my dad’s still my coach, and he’ll always be, because, you know, I grew up with him and he knows me better than everyone else.

“You know, I might put someone else on board that can, you know, help my dad sort of and them two people, you know, negotiate.  Not sort of a coach but someone just to help me a little bit.  You know, I haven’t made a decision yet who.  It might be a few weeks away and stuff, maybe after the grass.

“But I’ll see.  I’d like to get someone in before the grass that can help me and my dad.”

As for the match Tomic said he was ready to play. “I had a good draw, had a good first match.  But, you know, after that second point, you know, just strange how things can happen like that.  So, you know, there’s not a lot I can do.”

Tomic added: I probably, you know, have a choice of two or three people now.  I will decide that with my dad over the next week, and, you know, who knows?  Maybe you’ll see someone you don’t expect.