You are here: Home / Features / Azarenka Through to Second Round of the French Open 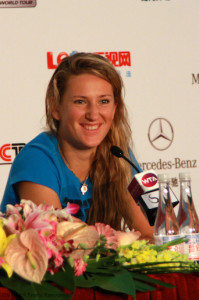 (May 29, 2013) No. 3 seed Victoria Azarenka finally completed her first match on the fourth day of the French Open. Rain washed out her match on Tuesday. The two-time Australian Open champion defeated Elena Vesnina of Russia 6-1, 6-4.

“I felt like I’m one of the last ones to start,” said the Belarusian of the long wait to finally play a match.. “It was a long wait, but I think performance-wise it was a good match.”

“I felt good, “ Azarenka said about her play.  “It was, you know, important to finally start the tournament.  I felt like I’m one of the last ones to start.

“It was a long wait, but I think performance‑wise it was a good match.  It was a quality match.  Elena is a very tough opponent.  I was actually surprised she wasn’t seeded at the tournament, and we know each other pretty well, so it was important to start right away from the beginning, you know, with a determination and a good focus because, you know, she’s a very dangerous opponent, has a very flashy game.”

So what did Azarenka do on Tuesday with her match delayed then canceled?

“I went back and just really was chilling the whole day, watching The Voice.  It was incredible.  I was so entertained.  Watched some, you know, parts of the matches when it’s on, when it’s off.”

“There’s this girl, her name is Judith, Azarenka continued. . She was a duet singer with Michael Jackson. She’s absolutely incredible. I mean, I have no idea how sounds like that can come out of somebody’s mouth. It’s just, wow.”

The focus on women’s tennis these days seems to be on Serena Williams and Maris Shrapova, No. 3 Azarenka doesn’t mind being out of the spotlight at all.

“Serena always has attention, no matter where she is,” Azarenka said. “She has been around the game so much and the No. 1 player in the world. It’s usual. For me it’s important to show up for my job. Whatever is going on around, it’s just entertaining for people. But I’m just focused on what I do and nobody else, really.”

Azarenka gets Annika Beck in the second round.