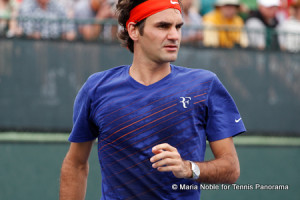 (May 29, 2013) No. 1 Serena Williams and No. 2 seed Roger Federer ran over their respective opponents to both reach the third round of the French Open on Wednesday.

Serena Williams extended a person-best winning streak to 26 with a 6-1, 6-2 victory of French wild card Caroline Garcia. Two years ago Garcia gave a scare to Maria Sharapova forcing the Russian to rally from down a set and a break.

The world No. 1 surged to a 5-0 lead before Garcia could get on the board.

Williams will make a bid for the fourth round when she takes on Romania’s Sorana Cirstea.

Serena and her sister Venus Williams pulled out of doubles at the French Open – no official reason has been given. The sisters were given a wild card into the tournament.

One statistic says it all about the Federer match – the Swiss had 54 winners while his opponent Somdev Devvarman won a total of 52 points in a 6-2, 6-1, 6-1 win, his 56th at the French Open.

“I think I’m playing okay,” said Federer.  “You know, definitely think the next match is going to be sort of the big test for me to see exactly where I stand.

“I’m happy that I was, you know, playing offensive and aggressive tennis in the first two matches, because I had the opportunity, but I didn’t back off and start to play passive tennis and waited for mistakes.  So I took it to my opponent, and I think that’s what’s good about it.”

Next up for the Swiss is Frenchman Julien Benneateau.

“I’m looking forward to it,“ Federer said. ”We didn’t play often on clay.  I think once here in a fourth round or quarterfinal.  I don’t remember.  But it’s never easy against him, so we’ll see this time what happens.”