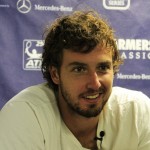 (May 30, 2013) Earlier in the week World No. 40 Ernests Gulbis spoke to the French newspaper L’Equipe at Roland Garros and called the top four players boring:

“I respect Roger (Federer), Rafa (Nadal), Novak (Djokovic) and (Andy) Murray but, for me, all four of them are boring players. Their interviews are boring. Honestly, they are crap I often go on YouTube to watch the interviews. With tennis, I quickly stop. It is a joke. It is Federer who started this fashion. He has a superb image of the perfect Swiss gentleman. I repeat, I respect Federer but I don’t like it that young players try to imitate him. When I hear them answer like Roger, I am terrified by phrases like: ‘I had a little bit more success at certain moments and that is how I won.’

“If I win, the guy on the other side of the net, I have sent him home. That is the reality. I do not want to hear in an interview a guy – who I will not name, but who I know well, that he thinks all his opponents are a##holes – putting on an act.”

“I would like interviews to be more like in boxing. OK, maybe those guys are not the most brilliant on earth but, when they face each other down at the weigh-in, they bring what the fans want: war, blood, emotion. All that is missing in tennis, where everything is clean and white with polite handshakes and some nice shots, while the people want to see broken rackets and hear outbursts on the court.

“The system is much too bureaucratic. It would need that the top players agree to change things. But they are rather happy that the smaller players are treated like sh## and that they don’t have enough money to pay for good coaches.”

World No. 1 Novak Djokovic was asked to comment on Gublis’ statement in his post-match news conference on Thursday. Here is what he said:

“I haven’t heard about his comments, and I haven’t talked with him about that, but everybody has their own opinion, so that’s difficult to judge something or somebody.

“We have a certain rules and ways that our tennis is functioning in our sport, and that you have to respect.  I try to look at it on a positive side.  I think that especially the top players are very respectful towards the sport and towards, you know, people who are appreciating and following the sport, to the media, and also to each other.

“This is very important, you know.  Even though it’s individual sport, you know, we still have very respectful and healthy relationships.

“It sends a good message out there.  In some moments in can be more entertaining, yes, it can.  But, again, there are good things, a lot of good things.  There is always something you can find and say, Okay, that’s something that should be different.

“But I agree with one small fact is that maybe we are lacking more enthusiasm and maybe more entertainment in the players, so more creativity in the players.

“But in the other hand, if you think from other perspective, it’s tough because it’s such a demanding sport now physically, mentally, emotionally.  Every day you’re basically on the court throughout the whole year.  Season is very long.  Throughout the whole year, you need to be very committed to what you do, to traveling.

“There is not much time, you know, that you have free time to think, okay, I can do something else or whatever, but you can always be creative, of course, can always attract some good attention and fun, fun stuff.

“Over the years I have found it difficult to open up and be a bundle of laughs in press conferences or interviews.

“I always try and give honest answers, but they are fairly boring so I don’t have to deal with the aftermath of scandals.

“I would say that I am different to what a lot of people think I am. What would bother me is if the people around me started telling me that I had begun changing, being an **** or something. That’s when you take it seriously.

“It is very easy to be false and fake in front of the camera. But to tell jokes and be fun all the time, that’s not actually very hard to do.

“If you are going to be truthful and tell things like they are, then that is much harder.”