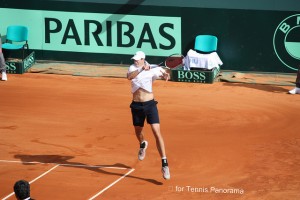 At 6-6 in the fifth set, Harrison double-faulted on a break point, giving Isner the decisive break in the set and match. Isner closed out the match on his serve.

“I started out a little ‑‑ I don’t know if the word is “tight,” but I had three days off and I didn’t start out that well., Isner said. “ It was slow, the conditions, a bit sleepy out there I felt like.  And the next thing you know I lost the first set, and we got in the second set tiebreaker, a situation that I have been in before, and a lot of times in matches of mine I’m able to win that tiebreaker and completely turn it around in my favor.

“That just wasn’t the case today, but what I did exceptionally well, more than serving, my forehand, everything else, was I just stayed composed and, you know, just told myself if I’m going to lose I’m going to want him to beat me and not beat myself.

I got up pretty quick in that third set and he gave me some momentum, and I really knew it was anybody’s match.”

Isner gets 12rh seed Tommy Haas in the third round.