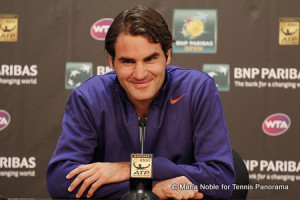 Benneteau broke Federer to open the match and held for a 2-0 lead.

Federer broke back to even the match 2-2 when Benneteau double-faulted. In the eighth game, Benneteau appeared to be in pain after stretching for a forehand and squatted down. He struggled with a groin injury for the rest of the match.

“He beat me at Rotterdam this year and he was incredibly ready at Wimbledon,” said Federer. “But he wasn’t in the best of form today, and you could see that he was a bit hindered by the leg problem he’s had for the past couple of days.”

“I thought it was a different match than what we usually play against each other, Federer continued.  “He was clearly handicapped with the leg, which I was able to take advantage of.

“But he didn’t play the same way he usually does against me in general.

“But then also, as a player, he had to totally change up his game because of his leg.  That was my feeling, anyway.  I could tell right away after a game or two that it wasn’t the same Benneteau across the net than what I’m usually have.

“So I kind of knew I had always, you know, some cushion in there, and then in the process because he was playing different and it was clay and was windy and wet and knowing what he had, I kind of just ‑‑ I just handled the situation, I guess.

“And so it wasn’t that test, I guess, I was expecting today.

“Federer will face either American Sam Querrey, or Frenchman Gilles Simon in the round of 16.”