You are here: Home / Features / Hampton Upsets Kvitova, Joins Countrywomen Williams, Stephens and Mattek-Sands in Round of 16

(June 1, 2013) American Jamie Hampton upset 2011 Wimbledon champion and seventh seed Petra Kvitova 6-1, 7-6 (7) at the French Open on Saturday to reach the fourth round of a major for the first time.

“I think I caught her a little off guard,” said the 54th ranked player.  “I came up with some good shots when I needed to, and I don’t think she was on top of her game.”

“I think that she is quite talented girl, and she played quite fast,” Kvitova said.  “That was the problem for me, I think, because I tried to play fast, too.

“But I did some easy mistakes.  I mean, it was very tough match today for me.”

The 23 year-old Hampton has moved up in the rankings from 70th in the beginning of the year to No. 54 after making WTA Tour semifinals at Auckland and Brussels.

“I had some good results in Australia at the beginning of the year,“ said the 23 year-old. “I had some tough losses before here.  Clay is not my best surface, so to come on to the clay and have some good wins like this is really encouraging.”

“Clay is not my favorite surface, but it’s not like I hate it.  I don’t like it but I don’t hate it.

“To make my first round of 16 at a Grand Slam on a surface that I like the least is encouraging, to be honest.”

The Auburn, Alabama resident committed 15 errors to her Czech opponents’ 33.

Asked about the four U. S. women making the fourth round of Roland Garros, she replied: “Yeah, impressive, huh?  Got a unique group I think between Serena, obviously the best player in the world, and Bethanie, Sloane, and myself. 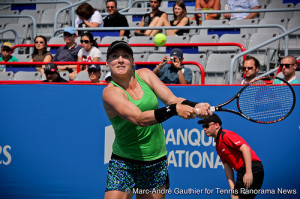 American Bethanie Mattek-Sands of the United States has also reached the fourth round. This is just the second time she’s accomplished that feat at a major. She last did it at Wimbledon in 2008. She had to regroup to comeback against qualifier Paula Ormaechea of Argentina 4-6, 6-1, 6-3.

“She had a lot of confidence coming through quallies,” Mattek-Sands said of her opponent. “She played three matches there, so she’s played a lot of matches, was feeling good.

“She was ripping the ball heavy today.  I know she’s had some good results on clay court.  She made the finals of an event earlier this year and lost to Jankovic in a tough match.

“I knew she was feeling confident and feeling good and came out here with nothing to lose.  I think she has a bright future.”

The 28 year-old beat sixth seed Li Na in the second round, the biggest upset so far at Roland Garros.

“I have won three matches here, and it’s great,” said the American.  I have been playing great.  You know, I think this whole year it’s been a good buildup for me.  I have had some tough losses and had some great wins so far this year.

“But the biggest thing I have been able to do is play week in and week out and build on my momentum.  That’s what I have been doing.”

Mattek-Sands joins countrywomen Serena Williams, Sloane Stephens and Jamie Hampton into the final 16. It’s the first time since the 2004 U.S. Open that four American women are in the fourth round when Venus and Serena Williams, Jennifer Capriati and Lindsay Davenport did it.

“It’s awesome,“ the 67th-ranked Mattek–Sands said.  “I’m so happy that U.S. tennis is coming on strong.  I think there are a lot of girls playing great.  I played Jamie earlier this year in Indian Wells, and she’s playing awesome.  I know she just won the first set against Kvitova 6‑1.

“I think there are a lot of young guns coming up that will be dangerous.  To have 13 women in the main draw here at the French Open, more than any other country, is awesome.  I’m proud.”

“I think she’s got a good head on her shoulders,” Mattek-Sands said about Stephens.  “She’s enjoying the traveling, the road, enjoying the moment.  And that’s all I would really say to anyone coming up.  Because it can be long.  There can be setbacks, there will be losses, injuries.  There will be bad weather.