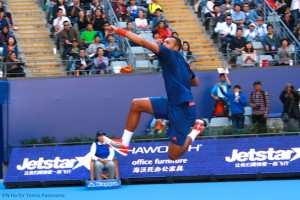 (June 4, 2013) PARIS – Jo-Wilfried Tsonga pulled off arguably the biggest upset of the French Open tournament, putting Roger Federer out, in straight sets 7-5 6-3 6-3 in the quarterfinals.

For many, the fact that Tsonga beat him may not have been the surprise. He had not dropped a set in this year’s run, and since being coached by Roger Rasheed at the start of the year, there was an expectation that results would and should come.

Despite being broken first by Federer, he settled into an aggressive game, breaking back and putting things back on serve. It came down to a miss-hit soaring high, that handed the first set to the Frenchman.

A single early break in the second set was all that was needed to set up a two-set lead.

The third set was perhaps the danger area for the Frenchman, with Federer breaking him in the first game, but being broken straight back.

Federer was able to peg back one match point, but it was not enough to stop Tsonga from claiming a semi-final place.

“To be honest, personally, I’m pretty sad about the match and the way I played. “Jo does a good job keeping the pressure on.”

In his post-match news conference, Tsonga spoke of his focus for the match.

He said: “I think tactically I played really good tennis, because from the beginning until the end I played the same tennis.”

Understandably as it is a home slam, there is a lot of expectation on his shoulders, but he shrugged it off, saying that it was not just for this tournament, but for everything he does.

He will face David Ferrer who came through a comparatively easy quarter-final against Tommy Robredo, who could not repeat the feats of his earlier rounds.

Tsonga said: “I feel I’m able to beat him because I believe I have the weapons for that.

“I have more endurance now.  I’m more consistent.  I hit harder than he does.”

Tsonga is carrying the hopes of a nation to be the first Frenchman since Yannick Noah to win the title (1983). The last Frenchman to get to the semi-finals was Gael Monfils in 2008.

Ferrer is through to his second French Open semi-final in a row and, like Tsonga, has not dropped a set.