You are here: Home / Contributors / Q & A: Catching Up with Taylor Townsend at Roland Garros 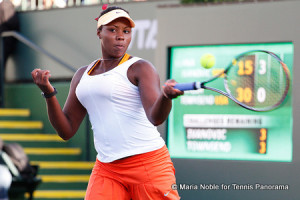 (June 5, 2013) PARIS – Being at Roland Garros is not all about running from Court Philippe Chatrier to Court Suzanne Lenglen for two weeks.

Out on the outside courts, die-hard tennis fans catch good doubles and junior action throughout the two weeks.

One U.S. junior has already enjoyed some success in making that tricky transition from the Juniors to the Pro Tour, notching up a win against the then-ranked 57, Lucie Hradecka, at the BNP Paribas Open at Indian Wells this year.

Ros Satar caught up with the No. 1 junior for 2012 Taylor Townsend after a solid second round win against Croatia’s Jana Fett.

Ros Satar for Tennis Panorama News: Great win today –a couple of breaks here and there but you really did edge it out?

Taylor Townsend: It was good, she came out playing really well, she was serving really well and in the beginning she really wasn’t missing a ball.

We exchanged some breaks and there were a few times where I could have served and gone up a break and a hold but she broke.

But it was a good match, I was really happy.

RS: What was it like out there – it started out quite cloudy but probably by the time that you were playing, it looked quite nice?

TT: It was actually very nice, it got a little bit cloudy and it was a little windy at times.

RS: Enough to whip up that clay into your eyes?

TT: Exactly – it actually got into my eyes a little bit but I am not complaining – I’m tough [smiling]

RS: Is it strange playing the juniors having made your pro debut at Indian Wells

TT: It’s not weird, because I played all last year and I’m still 17 so it’s not really weird but it’s definitely an adjustment that you have to make between going from the pros to the juniors.

It’s nice to see all my friends [going back to juniors].

RS: How did it feel to get that win in Indian Wells, to player ranked 57 at the time?

TT: It was amazing – like one of the best feelings ever, I felt on top of the world

I went crazy, after I did it, I just went nuts like I was a little kid.

But I was actually on a roll, I was playing really well so I [tried] not to think about it.

RS: What’s the transition like –the biggest challenge and the biggest benefit?

It’s really easy for you to let up a little bit and not really play to win like you would against the pros.

You can get away with not going for your shots as much and stuff like that, because even though you’re playing juniors, you’re still working on a specific thing.

But the benefits are you get to play matches, good matches that help you compete.

Basically it’s a good opportunity to continue what we’re working on.

If you change the way that you play and the way we’ve been practicing, then yeah that would be a downfall.

If we continue to work on the same line that we have been, with our strokes and playing to win and aggressive style of play, then it’s a huge benefit playing the juniors.

RS: So basically each time you’re playing in the juniors, you’re concentrating on one thing to improve, and when you go to the pros it’s really a question of putting that all together and going for it?

RS: What are the goals that you’ve set yourself this year?

TT: My goal is I wanted to reach at least into the top 200 or better by the end of the year and I really didn’t set a goal for juniors because honestly at the beginning of the year my coach was in Australia so I didn’t really know what my schedule was going to be.

But basically my pro [goal] I think very attainable because I’m at 333 already and we’re only half way done with the year.

I think I can do it.

RS: About the demon dirt – how is it going playing on clay?

TT: Actually I love it, because the clay here is so nice, they take such good care of the courts, it’s just so smooth.

The courts are just like candy underneath your feet, you just slide so gracefully – it’s so beautiful

RS: Is it very much a part of your season, the clay in Europe in particular?

It makes the season, it makes it different, it gives it a little bit of a unique character.

RS: What is your view of all the US women that have been in the draw?  You started with 15, down to 3 but two real headliners tomorrow – how does that make you feel?

TT: I’m proud, honestly – Serena(Williams), Sloane (Stephens), Venus (Williams), they’re all making me so proud to be an American.

They’re putting on such a good face on women’s tennis, it’s amazing.

RS: Are they all quite supportive of the juniors coming up, if you run across them at various tournaments?

We all hit together and they’re very helpful with giving advice and stuff like that.

RS: What is your schedule now for the rest of the year?

TT: You and I have the same question [laughs]

I know I’m going to Birmingham after this and then I’m going to play the juniors at Eastbourne and Roehampton and then Wimbledon and after that I have no idea.

RS: Are you going to play the juniors at the rest of the majors this year?

TT: Yeah just the majors really, because US Open most likely, I’m not really sure.

We’re just doing it just to play matches really, and stay competitive because if I wasn’t I would come over here and only play one or two tournaments and then be done.

RS: I guess playing the majors, you get a small taste of what it’s like to play that big an event?

RS: Are you doing any sight-seeing, any fun stuff whilst you are here?

TT: Hopefully – I mean this year I’m playing doubles so I’m not at the site all day

I’m not playing two matches so I think my dad really wants to go out, this is their first time out.

I don’t know what to do see because I didn’t go sight-seeing last year so we’re all going to experience this together.

But [definitely] the Eiffel Tower and Champs Élysées and some other stuff.

I’m just asking the ladies in the locker room, and they’re helping me a lot.

[RS writes down a load of suggestions]

At the time of writing, Taylor was into the third round of the Girls’ Singles Draw at Roland Garros.

On Tuesday evening in Paris, Townsend received the International Tennis Federation award for being the top junior girl for 2012 at the ITF World Champions Dinner.  Townsend was the Australian Open 2012 Girls Junior Champion. She is the first American junior girl to end the year at No. 1 since Gretchen Rush in 1982.

Karen Pestaina contributed to this interview and report.