You are here: Home / Features / Spectacular and Streaky – A Tale of Two Semifinals 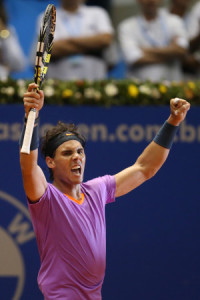 (June 7, 2013) PARIS – On perhaps the hottest day of the French Open tournament this year, the scene was set for two potentially explosive semifinals. There would be an air of expectation for both semifinals, but only one would deliver.

After an emotional week for Novak Djokovic, here was a chance to get the one slam that had so far eluded him.

All that stood between him was his conqueror last year, and defending champion – Rafael Nadal.

The sheer ferocity of hitting from the start was like a game of cat and mouse, but with sledgehammers for paws.

The first set was a tight affair, with Nadal capitalizing on his first break point opportunities to nudge ahead, and take the first set.

It would always be key to any success Djokovic might enjoy to start fast, or now at least stay in contention.

The Serb was starting to show his frustration as errors crept in under the pressure of Nadal’s intensity.

A couple of traded breaks, but at least Djokovic had seen that Nadal was breakable.

A moment taken to adjust the wooden crucifix around his neck, and perhaps to ask for some assistance or divine intervention finally delivered with another break for Djokovic to edge ahead at 5-3, serving out the set.

Suddenly we had a fight on our hands, but it was almost as if a wave of weariness hit Djokovic, who was now slipping and sliding on the newly swept, very dusty court.

It looked like he might have tweaked something, and either way, Nadal was not taking any prisoners, quickly romping to a 5-0 lead as Djokovic slumped about the place lethargically.

Having already received a time violation warning, Nadal received a point penalty in the last game, not that it made any difference to Djokovic, who by now had at least escaped a “bagel”.

A new lease on life came back to those elastic legs of his, and the crowd were treated to some lovely rallies and reflex volleys at the net.

Twice Nadal broke for the lead, and twice he was pegged back immediately, pushing the pair into a tiebreak – won by Djokovic, and giving the crowd what they wanted – a deciding set.

Djokovic must have thought it was his time, breaking immediately and staying ahead until he missed the simplest of overhead put-aways by sliding into the net before the ball had bounced twice.

It really became a day for the rule-book as Nadal had no play on the ball and it had effectively bounced outside of the court lines when he made contact with the net.

In any case, it was not the first fudged overhead, and it certainly would not be the last as time and time again, Djokovic would send them crashing into the net, or spectacularly long.

Finding himself now serving from behind to stay in the match, there was another twist of drama as Djokovic asked to speak to the supervisor, after slipping several times on the dried out clay at the back of the court.

The final salt in the wound was a break to love, ending his pledge to win the French in memory of his first coach.

“I congratulate him, because that’s why he’s a champion.  That’s why he’s been ruling Roland Garros for many years, and for me it’s another year,” said Djokovic after the match.

“I managed to come back and start playing really, really well as the match was going on, but it wasn’t good enough.

“I lost the match after five hours.  I wanted this title so much, so I am disappointed.  That’s it.  You know, that’s the way I feel.”

Nadal, playing in his first five-set match since his return from a seven-month injury layoff was relieved to have made it through to another final.

“So that’s probably the most difficult thing to do it, and I did.” 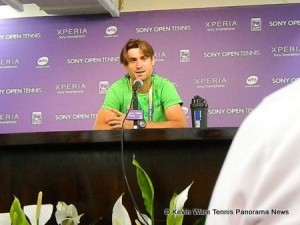 It is inevitable that people suggest that the Nadal/Djokovic match-up was the “final that should have been” and following it was the ‘blockbuster that never was.”

Jo-Wilfried Tsonga found himself carrying the hopes of a nation, looking to become the first French finalist since Henri Leconte in 1988.

David Ferrer was looking to reach his first slam final.

Certainly the crowd wanting to lift Tsonga as much as they could, roaring when he finally got a game on the board in a first set drubbing, and as he made things a lot more competitive in the second set.

For Tsonga it seemed a match of irritations – differences of opinion with the chair umpire over marks, some wild errors, and just overall inconsistency.

If there is one player that you can ill afford to have streaky patches against, it is David Ferrer, who just played solidly all the way around.

To fail to live up to a crowd’s, and even a nation’s expectations will have been a tough pill to take.

“Maybe in a few hours, few days, you know, I will say, Okay, it was a good tournament; I played well; I was in semis.

For Ferrer, there is the prospect of facing his compatriot, who has owned him on clay all but one of the times they have met, (Stuttgart, 2004).

“I won once when we were kids.

“Then I also won on faster surfaces, but each match is different, anyway.

“So I need to focus on the now and I need to make the most of all my shots.”