You are here: Home / Features / Donna Vekic and Madison Keys head the youngsters’ Charge in Birmingham and Beyond 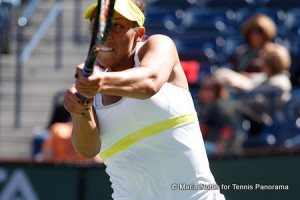 (June 13, 2013) BIRMINGHAM, UK – Women’s Tennis Association – says who? It’s the kids who are taking over the city of Birmingham. They’re seemingly hiding behind every corner, popping out of every doorway, exploiting every nook and cranny and wreaking havoc on the actual grown women, whose images the tour was named in.

With every glance towards this group of young adolescents, they appear to be multiplying, evolving and becoming increasingly impossible to shun or ignore. Whenever seemingly all up-and-comers are accounted for, a new player smashes through into relevance and demands to be counted. When one youngster crumbles, another stands tall. It shouldn’t come as a surprise, of course; the glorious past has reaped far younger supernovas, far more talented youngsters and in far quicker time. But at a time when the well of everlasting talent appeared to have all but impossibly dried up, this group of fresh, new faces yet to bear the battle scars and wear-and-tear of life on tour are a welcome, or at least necessary quench to this thirst.

A myriad of pretenders have already said their hopeful hellos, before fruitlessly sweeping off into the night. Heather Watson and Laura Robson, supposedly the main event, were brushed aside yesterday on home turf without a set between them. Meanwhile, 20 year-old Ajla Tomljanovic, whose ranking came to a screeching halt just inside the top 200 for the better part of a year before contracting a difficult bout of mononucleosis, continued her glass ceiling-smashing comeback by qualifying and brushing aside defending champion Melanie Oudin before pushing top-seeded Kirsten Flipkens to the brink, in a performance undermined only by her inexperience. Only months into her return, she has already strolled effortlessly back to her career-high ranking with the promise of a deadly assault on the top 100 by year’s end. Others to make brief appearances in Birmingham included the likes of Eugenie Bouchard, Alison Van Uytvanck, Lauren Davis, Jana Cepelova, Elina Svitolina, Timea Babos, Yulia Putintseva and more – the list is mindnumbingly endless.

Today was the turn of former Junior Roland Garros champion and Junior
Wimbledon finalist Kristina Mladenovic to take her final bow. After also arriving at the gates of the top 200 quickly after her junior success, she too found the final transitional hurdle an irritant. 2013, however, has been generous to her, and as she served for the match at 6-5 in the second set against Daniela Hantuchova, things were only improving. Until that point, the young Frenchwoman looked in cruise control, using her devastating serve to supreme effect against an aging Hantuchova. But the Slovak, who appears to be reveling in her role of pantomime villain, devoured yet another child with cruel efficiency.

As of today, only two remain. Interestingly, they are the two youngest top 100-ers in this small army of youngsters, and perhaps the most promising.  Madison Keys was up first. After years of hype and expectations following her first WTA victory at the grand old age of 14, 2013 has been quite the coming-out party for her. Already she has ratcheted up a smattering of impressive results; not least her three different WTA quarterfinals on the pounding hardcourts of Sydney, the anonymous green clay of Charleston and today on the hallowed lawns of Birmingham; possibly hinting at an all-court domination to come.

Against Mona Barthel, Keys chuckled at the difference in rankings and delivered a stone-cold dismissal of her foe, making a mockery of the German’s sixth seeding with a 6-3, 6-2 victory. The result wasn’t exactly met with any surprise, but the manner in which she coolly brushed aside any challenge from the talented German was priceless. Usually, even when playing at the height of their powers, it’s the lower ranked player exerting the most effort as they fight to remain at a level they can only dream of maintaining consistently. However, the roles were reversed and it was Keys who played with such calm irreverence, competing with energy to spare. The American finished off the match with two booming aces – each down the ‘T’ – having faced only one break point in the entire match, sending a Serena-esque message to the rest of the field that screamed: “You can’t beat what
you can’t put your racket on.”

Vekic was next. Even younger than Keys, her ascension through the rankings should prove a valuable lesson to all those who follow in her footsteps. She and her coach, David Felgate, shrugged aside the conventional route of first competing in juniors – and usually acquiring countless dreadful habits in the process. Instead, they headed straight for the futures and challengers. Not the ones around her native Croatia or where she resides in the UK, no. Rather, they targeted the ITFs in the anonymous parts of Eastern Europe and Asia, picking like vultures at the weakest points on offer. It allowed her to play at the level appropriate to her age whilst earning points and finding herself in situations – both on and off the court – actually relevant to her future in the sport.

And here she is in her second tour quarterfinal. Two days ago, she quickly fell down 0-2 to seeded Urszula Radwanska. It was then that, seemingly on a whim, she decided to teach her eighth-seeded opponent a lifelong lesson in pure, unadulterated aggressive tennis. It was a battering, a demolition job so loud and clear that the pole’s ears are likely still  ringing from the sound the balls made as they bounced squarely on every line and passed her by, hopelessly out of reach.

But today was different. Against an irritatingly generic grinder in the American college tennis graduate Maria Sanchez, and on an energy-sapping outside court, Vekic was forced to retreat within herself in order to conquer and advance. She played with far more control and caution, righting the ship by forcing the American into high-paced rallies that simply overwhelmed her underpowered college-groomed game and left her hemorrhaging errors. It hinted at yet another benefit borne out of her enriching experiences on the challenger circuit – a self-awareness far beyond that of the average sixteen year-old junior.

One of the enduring and undeniably true critiques of this new, upcoming generation – one that can be heard frantically whispered with every new youngster’s success – is the one-dimensionality of almost each and every one of them. The sophisticated layers previously required to be a top player – the hybrid between defense and offence, variety and simplicity – are nowhere to be seen. Instead, they fit far too snugly into the boxes of playing styles. Some are underpowered retrievers, others are immobile attackers and few can pull off a remotely passable impersonation of any other style of play. But, at least for now, this group of youngsters who have ascended almost simultaneously onto the tour, overwhelming us by their pure numbers and stealing our attention both this week, before and beyond, are
surely here to stay. And we will be watching.

Tumaini Carayol covering the AEGON Classic in Birmingham for Tennis Panorama News. He is a contributing writer at On The Baseline, and writes about professional tennis at his site Foot Fault. Follow his tournament updates on twitter @TennisNewsTPN.