You are here: Home / Features / Jamie Hampton: From Clay to Grass – How the Perfectionist Learned to Adapt 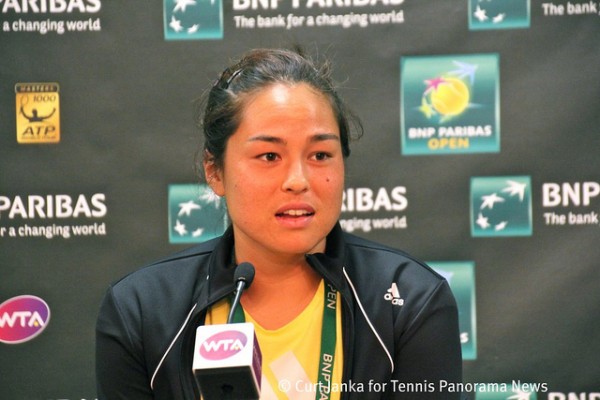 Ros Satar, reporting for Tennis Panorama News, caught up with Hampton after the match, talking about tumbles in the clay, perhaps chewing the Wimbledon grass, and how losing all her baggage in Brussels helped her overcome her streak for perfectionism.

Ros Satar: Firstly – How’s your back holding up?

Jamie Hampton: It’s been a little iffy here and there, I guess.

The ball’s a lot lower but as of right now it’s ok.

RS: You were getting a quite down on yourself on some of your backhand – were you trying to feel your way back in?

Her balls were coming in inch over the net, she’s a talented player, she can redirect the ball really well and has got good feel and good hands so it’s tough.

I had trouble reading her game in the beginning and did well to get the break and close out the set with the good service games.

RS: What were the calls like to today – a couple of calls that looked long on either side, I know that you had a bit of a discussion [with the umpire]

JH: The calls! It’s tough, for everybody.

Someone’s not going to be happy so you’ve just got to learn how to deal with it, put it behind you and move on to the next point.  It’s tough though.

RS: You had a pretty tough round against Lucie (Safarova) at Roland-Garros, and you seem to be hell bent on taking as much of Roland-Garros clay with you (Jamie took a couple of falls at Roland-Garros, getting clay in her knees)– I’m guessing you want to be standing on your own two feet?

JH: [I am] not wanting more grass stains on my clothes!

It was a really tough match at Roland-Garros, there was a lot of momentum swings.

She’s been top 20, and she’s got some great shot making ability, she’s left-handed which always makes it a bit tougher, so I am going to have to be ready from the get go because this surface suits her pretty well – she uses a slice serve, she can look to step up and play aggressive, which is her game.

So I’ll have to be ready and play aggressive as well.

RS: You were playing pretty aggressively this morning, hammering back – is that because [Hsieh] was hitting so low and you just were having to generate some pace to put her on the back foot?

JH: My game as well is to mix it up but it’s not like I can’t go toe-to-toe with who ever I play with.

RS: Looking ahead to Safarova next, it’s got to give you confidence that you’re ahead in your head-to-head, which is 1!

RS: Q: Back to Roland-Garros, you took a fair bit of clay back with you, what are your plans for our Wimbledon grass?  What are you planning to do there!?

JH: Do not! Leave it all there at Wimbledon, I do not want to take any grass back with me.

RS: No face-planting, no doing a Djokovic and kissing/tasting the grass?

JH: No kissing the grass but if it calls for it, I will definitely take a dive.

JH: I don’t know if this answers your question but when I was a kid I would just like to play tennis.

You know for me that’s kind of what set me apart.

I was always playing with boys, fist and foremost, they could overpower me so I was learning how to find different ways to beat them.

I think that translates well to the grass and I think that sets me apart from being different from everyone else.

They play a little one dimensional[ly].

RS: You will have grown up on the hard courts and you’ve done exceptionally well on clay and grass this year so it gives you a pretty good all round complete game and a good base – so what are your goals going into Wimbledon and the US Open?

JH: I don’t have too many points to defend, so I’d like to improve my ranking and be seeded by the time US Open comes around, so it means better draws. (Per the WTA website Hampton is defending 100 points from reaching the second round of Wimbledon last year.)

For Wimbledon, I haven’t even thought about it yet, but I’d like to take it, as well as this tournament, one match at a time.

Anybody that you come across, you don’t want to take them lightly, you’re going to be pretty cautious about who you’re playing and just got to go out and play good tennis.

RS: Obviously you’re going deep [in Eastbourne] – how much store do put into looking ahead, so beyond Safarova, when the draw comes out on Friday?

RS: Just take it one match at a time?

JH: I just want to go out and try to first and foremost play my game and have fun while I’m playing.

JH: I’ll tell you a little story – in Brussels I came into that tournament not playing great I lost in qualifying of Rome, Madrid, and in my head a little bit I was like: “Here we go, this is clay.”

Last year I won one match on the clay, it was like trying to find a way to get through it.

And then in Brussels everything fell apart, I had some things to deal with off the court.

I didn’t get my luggage, didn’t have my racquets, I didn’t have any clothes, I had nothing.

So I’m sitting here at this tournament, no racquets, no string, no clothes, and a couple of days later I developed an eye infection and I just: “OK I’m going home, I hate this place, I hate Europe!”

I literally took off all the pressure that I put on myself to do well, and I was just like go out and try to compete and just have fun playing tennis like when you were a kid.

What you love to do on the court, and go out and play.

RS: I’m guessing as part of the tour, you’re going to have things your luggage going astray etc., so how do you stop that from wanting to club somebody death with your racquet (except you don’t have that either!)?

JH: I like to have my drinks beforehand, I didn’t even have any drinks prepared so I’m just sitting here twiddling my thumbs, I had no clue what to do, and I just went out and played.

It was literally just me and the court.

I took two racquets out that Wilson managed to get to me, I didn’t even have a bag, I just carried them out there.

I manage to pull through and win those matches and I learned from that experience and I was like: “Ok you need to take something from it, things aren’t going to always be perfect so do your best with that.”

That helped me with my attitude on the clay, things aren’t going to be perfect, you’re going to have to go out and compete, and earn whatever you get

RS: I know you’re not looking ahead, but what fun things are you looking to do in London, apart from eating Wimbledon grass?

JH: Laura [Robson] invited me to a concert afterwards (The Killers) – I think its after Wimbledon, we’ll see.

I’ll be looking to get home.