(June 19, 2013) The seagulls had much to squawk over on Wednesday, as another top seed tumbled out of the competition, after Agnieszka Radwanska’s exit at the hands of Jamie Hampton yesterday.

The next person on the train back to the Big Smoke was Milos Raonic, who came unstuck at the hands of Ivan Dodig 6-2, 7-6(7)

Raonic, by his own admission, started badly, and although he forced a tie-break in the second set, he couldn’t take advantage of some double-fault jitters from Dodig.

“Obviously the surface doesn’t make it easy,” he said, “I think it’s easier for me to figure out things on hard courts, per se, but I think it’s all on my shoulders. 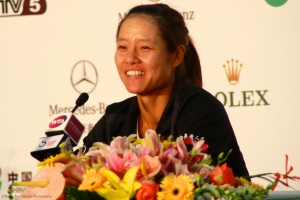 Li Na, the highest seed left on the women’s draw had a walkover via Marion Bartoli’s withdrawal due to a viral illness.

“I started to feel a it this way on Monday,” she said in a statement.

“Each day it has gotten worse.

“After a few days of res, hopefully I will be back on the court to get ready for Wimbledon.”

Na found out while they were warming up so spent the time practicing, and musing over whether she could deviate from her favorite restaurant and try out some traditional fish and chips, when her coach is not watching.

“Maybe I will try one day even without the coach.” 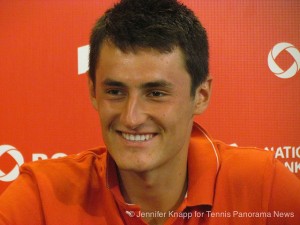 Bernard Tomic battled his way through a tough three-setter with Julien Benneteau.

Tomic regained his focus and registered his first back-to-back in since February.

“It’s been a Roller Coaster, I tell you.

“But now I’m happy I won these two matches, so it’s a lot of confidence.”

But the seagulls had reason to squawk their disappointment as the remaining Brits in the women’s draw all exited. 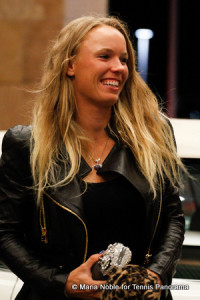 First up, Laura Robson put up a better fight against Caroline Wozniacki a couple of weeks after facing her in the first round at Roland-Garros.

“Today there were a lot of points where I set everything up and did all the right things and then just missed the last forehand,” Robson said.

Robson also found herself perhaps shocking the dentures off the typical Eastbourne populous with a few words of earthy Anglo-Saxon, picked up by the on-court BBC microphones. 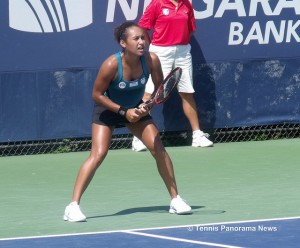 Next up, and on their way to London was Heather Watson, who lost a topsy-turvy three-setter against Elena Vesnina.

She admitted that it was not necessarily a physical issue, still on her comeback after recovering rom glandular fever.

“I didn’t have much focus, and I thought it was a good opportunity wasted.

I’ve just got to sweep that one under the rug, get back on the practice court, work hard and make sure it’s a good week next week.”

These half-on half-off days are becoming few and far between, and Watson said that she works with a sports psychologist (when she is in Florida), and may be overdue a visit.

Elena Baltacha also dropped out of the draw in a grinding three-setter at the heat of the day (the ice-cream van did great trade today).

Baltacha has improved key areas in her game, and takes positives from every game she gets under her belt since coming back from a long injury lay off.

She had identified that the top players move well, and serve well – all elements she has worked to improve, crediting the LTA’s Louis Cayer who has focused on her how she sees herself as a player.

“I’ve realized I’m more skillful,” she said, “tweaking certain areas like my serve, understanding what I need to do in certain parts on the court, where I recover to, and certain movement patterns.”

The evening finished with a close tussle between Gilles Simon, who had been struggling with injury this week, and the new young British hope Kyle Edmund.

“Even though I’m looking at positives, I’m not like, Oh, I’m happy I lost.

Edmund pushed the world no. 16 to two tiebreak sets.

“I thought the first one was close and I played a pretty good tiebreak.

“The second one was a little bit sloppy at times.

“There were just some really long rallies towards the end, and, yeah, he just came out on top.”

British hopes still fly in the men’s doubles, along with the seagulls.