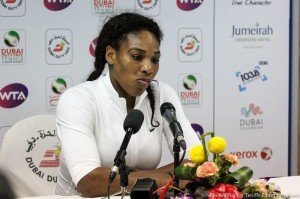 Serena Williams was inundated with questions in her Wimbledon pre-tournament news conference on Sunday about Maria Sharapova’s razor-sharp comments in reaction to Williams’ quotes in a recent Rolling Stone magazine.

On Saturday Maria Sharapova took aim at Serena Williams in regard to a recent Rolling Stone article where the author Stephen Rodrick did an extensive interview with the world No. 1.  Rodrick made an assumption that certain comments made by Williams about an unnamed player were about Sharapova.

When asked about the article Sharapova said: “Obviously I have a tremendous amount of respect for Serena and what she’s achieved on the court.  You can never take anything away from that.

“I was definitely sad to hear what she had to say about the whole case.

“As for myself, or whether it was about somebody else, nothing personal, you know.  We’ve talked to Serena many times, and I know everyone tries to create rivalries between us here and there.

“At the end of the day, we have a tremendous amount of respect for what we do on the court.  I just think she should be talking about her accomplishments, her achievements, rather than everything else that’s just getting attention and controversy.

“If she wants to talk about something personal, maybe she should talk about her relationship and her boyfriend that was married and is getting a divorce and has kids.  Talk about other things, but not draw attention to other things.  She has so much in her life, many positives, and I think that’s what it should be about.”

Williams told media that she approached Sharapova at the Wimbledon players’ party to apology.

“I personally talked to Maria at the player party, incidentally,” said the world No. 1.

“I said, Look, I want to personally apologize to you if you are offended by being brought into my situation.  I want to take this moment to just pour myself, be open, say I’m very sorry for this whole situation.”

Asked to give a reaction to Sharapova’s comments made on Saturday, Williams said: “I definitely was told of the comments.  I definitely like to keep my personal life personal.  I think it would be inappropriate for me to comment on it.

“But, yeah, I’ve always, in the past ‑ you guys have known ‑ I’ve kept my personal and professional life very private.  I’m going to continue to do that.”

Defending champion Williams is coming into London with a 74-3 record since 2012 Wimbledon when she began to work with French coach Patrick Mouratoglou to whom she has been rumored to be linked with romantically.

Williams begins defense of her title on Tuesday when she takes on Mandy Minella.