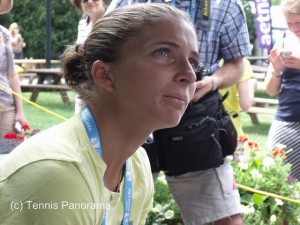 (June 24, 2013) A 19 year-old from Puerto Rico provided the first upset of the fortnight on the opening day of Wimbledon. Monica Puig stunned fifth seed Sara Errani 6-3, 6-2 in the first round.

Errani is better known as a clay court expert who was the French open runner-up in 2012.

“It’s a hard tournament for me, and of course it’s very important,” Errani said.  “But I don’t like too much the surface, so for this it’s tough.”

Puig nailed 38 winners past the Italian.

The 65th ranked Puig needed 5 match points to seal the win out on show court 18 in her first ever pro grass court match.

“My mom played tennis when she was very young, so she introduced me to tennis,” Puig told media.  “I kind of stuck with it.”

Errani praised her opponent. “She served very good, did not make many mistakes and hit the ball strong. My big problem here is that I can’t move how I want.”