You are here: Home / Features / Maria Sharapova, Caroline Wozniacki and Ana Ivanovic All Fall on Day 3 of Wimbledon

(June 26, 2013) Four former number ones – Maria Sharapova, Caroline Wozniacki, Ana Ivanovic and Jelena Jankovic all lost in the second round on Wednesday at Wimbledon.

Sharapova slipped and fell several times on the  court while de Brito played aggressively while returning the Russian’s shots like a backboard. One of  Sharapova’s falls on Court 2 required a medical time out taken off-court.

“I give her a lot of credit,” said Sharapova.  “I think she played extremely well today.  She was really solid from the baseline.  I don’t feel like I was aggressive enough, that I hit the ball deep enough.  I wasn’t ready after the returns or the serves.  She’s someone that plays extremely aggressive.  I just wasn’t there.”

“I’m just really happy I got through that match.  It was a really great win for me.”

“When I was 16, when I was in the top 100, when I was there, everybody was comparing me to like Martina Hingis, you know, expecting me to win a Grand Slam at that age,” the 20-year-old said.

“But that doesn’t happen anymore, winning Grand Slams so young.  Tennis is so competitive now and so hard, it’s hard to stay there.  Also with all the restrictions from the WTA, I was only allowed to play I think eight tournaments a year.  It was hard for me to stay in the top 100.  When I had points, I couldn’t defend them because I was only playing maybe one or two tournaments a month.  And before you didn’t have those restrictions.

So it was hard for me to stay in the top 100.  Obviously my results didn’t go so good for a while.  But it was hard to stay there ’cause I was restricted to tournaments.

“But, yeah, I mean, a lot of people expected a lot from me.  But, you know, I just tried to stay there and kept going, and now I’m here again, and I hope to just keep doing well for the rest of the year.”

Canada’s Eugenie Bouchard knocked out No. 12 seed Ana Ivanovic of Serbia 6-3, 6-3.  The 2012 Junior Wimbledon winner began the match by breaking Ivanovic for a 2-0 lead and never looked back.

“To play on Centre Court at Wimbledon,” said Bouchard. “ It’s what everyone wants to do.  So, yeah, it was a great opportunity for me.”

“I think any day I can beat anyone.  It’s just about playing the way I know I can play.”

“Today I was able to stay with her and take my chances when I could,” said the 19-year-old.  “I mean, anything can happen in a match.”

“Definitely she played very good match today,” Ivanovic said.  “Was the first time I actually I saw her play, so it was obviously a little bit tough to get used to.

“She was tracking the ball really well, serving well.”

“I think I had chances obviously in the beginning of the match that I didn’t use,” said the Serb.  “My forehand wasn’t there today.  I think that was a big issue today in my game.  She was playing really well, and I had to do more with it, which I didn’t.  That was a little bit disappointing.” 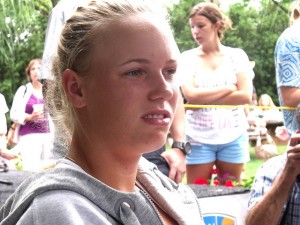 No. 9 seed Caroline Wozniacki playing with a taped up right ankle was dismissed by Petra Cetkovska 6-2, 6-2.  Cetkovska of the Czech Republic, ranked 196th in the world had to qualify for Wimbledon.

A year ago Cetkovska was ranked as high as 25 but was sidelined with an ankle injury and a foot injury. Her right knee was taped for the match.

The Czech woman hit 30 winners against the slumping Wozniacki, who also lost in the second round of Roland Garros.

“There’s not much to say,” Wozniacki said about the loss.

Health is the Dane’s main objective right now. “Honestly right now what my main focus is, is to get my body back in shape, tip‑top feeling 100%.  That’s when I can start focusing on exactly what I want to do on the court to be 100% ready, you know.

“But I think right now it’s just important that I feel absolutely no pain once I step out on the court.  That’s really what I’m looking for right at this point.”